Yorba Linda is a city in southern California, in the United States. It is approximately 13 miles (21 km) northeast of Downtown Santa Ana, and 40 miles (64 km) southeast of Downtown Los Angeles. As of the 2010 census, there are 64,234 people living in the city. In 2006 it was identified as the richest city in the United States by the U.S. Census Bureau that shows a median household income of $121,075 higher than any other.[3][4][5]

This place was home to Native American tribes once.

In 1834, Jose Antonio Yorba's most successful son Bernardo Yorba (the city would be later be named after) was granted the 13,328-acre (53.94 km2) Rancho Cañón de Santa Ana by Mexican governor José Figueroa.

On November 2, 1967, Yorba Linda was incorporated as a city.

In November 2008, the eastern part of the city was struck by a brush fire that destroyed 113 homes and damaged 50 other homes.

It is bordered by Anaheim on the south, Placentia on the west and southwest, Brea on the northwest, Chino Hills State Park on the north, and Corona on the east and bordered by the counties of San Bernardino and Riverside.

The two nearest seismic faults are the Whittier Fault and the other is Chino Fault, both of which are part of the Elsinore Fault Zone.[9] 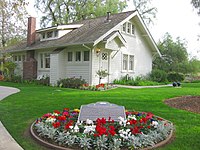