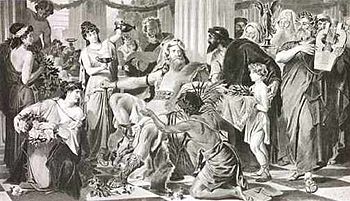 Alaric I, also Alaricus, (reigned 394–410 AD) was a leader of the Visigoths.[1] He is famous as the Gothic leader who sacked the city of Rome in 410 AD.[2] Very little about his family is known. As a young man he received much of his military training in the Roman army. He next appears as a war leader of Gothic forces fighting along with Roman troops at the Battle of the Frigidus in 394.[3] In January 395 the emperor Theodosius I died dividing his empire between his two sons. Alaric revolted and as the leader of the Visigoths he attacked parts of the Eastern Roman Empire. He later attacked the Western Roman Empire. In 408 he attempted to attack Rome but was bribed to leave. He returned two years later, defeated and occupied the city. He died in 411.[4]

Alaric was born on an island on the delta of the Danube River.[5] He was a member of the noble Balti dynasty of Visigoths.[6] He was first mentioned in 394 AD as a commander under the Roman Emperor Theodosius I in his war against Eugenius.[6] He became the leader or king of the Visigoths in the mid 390s.[7] Alaric rebelled against Emperor Arcadius in 395 and invaded Greece.[8] When he came to the walls of Athens, the city paid a heavy ransom so he left them unharmed.[9] He then defeated Corinth, Argos and Sparta.[8] He continued to lay waste to Greece until 397 when the Roman general Stilicho surrounded Alaric's army at Arcadia. They cut off the water to the Gothic camp and thought it was impossible for Alarc to escape.[9] But Alaric broke through their lines and marched 30 miles (48 km) to the north over very difficult terrain.[9] Alaric then made a treaty with Arcadius. Stilicho returned to Italy without having defeated Alaric.[9]

In 401-402 AD Alaric entered Italy. He tried the same tactics he used earlier but was unsuccessful against the Roman army.[7] At the Battle of Pollentia in 402, the Roman army defeated the goths.[9] Alaric's wife was one of those captured by the Romans.[9] However, the Visigoth losses were very few and Alaric's army left in good order.[9] Alaric crossed the Po River intending on attacking Rome but was met and defeated again by Stilicho at the Battle of Verona.[9] Alaric's army attacked across the Danube and Rhine Rivers again in 405 and 406 AD.[7] Stilicho, who was now ruling in the name of the Emperor Honorius, made a treaty with Alaric. But Stilicho was killed in 408. Alaric invaded Italy again and demanded Stilicho's promises to him be kept.[7] 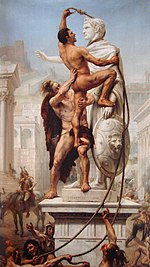 From late 408 AD, the Visigoth army camped outside Rome.[7] Alaric demanded payment from Honorius, who was safe in Ravenna, which the emperor refused to pay.[10]

Zosimus the historian wrote the only known account of the last negotiations before Rome was sacked:

"When Alaric heard that the people were trained and ready to fight, he said that thicker grass was easier to mow than thinner and laughed broadly at the ambassadors, but when they turned to discuss peace he used expressions excessive even for an arrogant barbarian: he declared that he would not give up the siege unless he got all the gold and silver in the city, as well as all movable property and the barbarian slaves. When one of the ambassadors asked what he would leave for the citizens if he took these, he replied: 'Their lives.'" [10]

On August 24, 410 AD, Rome's city gates were opened by slaves.[11] Alaric's Visigoths began three days of murdering and plundering.[12] They damaged buildings and stole from tombs of former emperors.[11] It was the first time in 800 years that Rome was sacked. But the Visigoths continued their destruction further south in Italy.[11] The casualties were high on both sides. The Romans lost an estimated 15,000 men while the Visigoths lost about 17,000.[11]

Alaric planned to move his army into Sicily and then on to Africa.[13] But he died soon after Rome fell in 410 AD.[13] Ataulf succeeded Alaric as king and took the army into Gaul.[13]