Butane, C4H10, an alkane characterised by a four carbon chain.

Alkanes are chemical compounds, made of carbon and hydrogen. The simplest alkane is methane, which is made of one carbon atom and four hydrogen atoms. Larger alkanes have two or more carbon atoms connected or bonded together in a chain. The carbon atoms of alkanes are joined together by single bonds, which is what makes them different from alkenes. The alkane's general formula is CnH2n+2.

These are some alkanes: 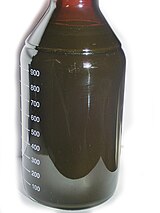 Fractional distillation is the method used to separate the different hydrocarbons in crude oil, used to get a purer or more distilled, sample of a single alkane.