A drawing by an architect made in 1893

An architect is a person who designs buildings and prepares plans to give to a builder.[1][2] What he or she designs is called architecture. Architects make drawings with pens, pencils, and computers, and this is also called drafting. Sometimes they first make small toy-sized buildings called models to show what the building will look like when it is done. Some of these models survive for hundreds of years, such as St Paul's Cathedral, London. 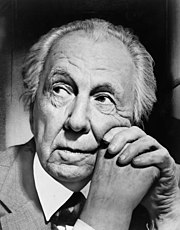 Frank Lloyd Wright one of the great architects

Although there has been architecture for thousands of years, there have not always been architects. The great European cathedrals built in the Middle Ages were designed by a Master Builder, who scratched his designs on flat beds of plaster. Paper did not exist in Europe at this time and vellum or parchment were very expensive and could not be made in large sizes.

Some cathedrals took hundreds of years to build, so the Master Builder would die or retire and be replaced and often plans changed. Some cathedrals were never finished, like Notre Dame in Paris or Sagrada Família in Barcelona.

An architect has a very important job, because his or her work will be seen and used by many people, probably for a very long time. If the design, materials and construction are good, the building should last for hundreds or even thousands of years. This is rarely the case.

Usually building cost is what limits the life of a building, but fire, war, need or fashion can also affect things. As towns and cities grow, it often becomes necessary to make roads wider, or perhaps to build a new train station. Architects are employed again and so the city changes. Even very important buildings may get knocked down to make way for change.