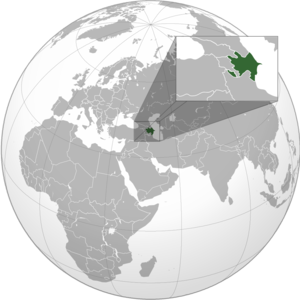 Light snacks of the Azerbaijani cuisine.

Azerbaijani food is what people cook and eat in Azerbaijan. Foods from different cultures have influenced Azerbaijani. However, it remained different from foods in other countries. Many foods that started in Azerbaijan are now part of other cultures. For the Azerbaijanis, food is an important part of the country's culture and is very connected with the history, traditions and values of the nation.

Out of 11 climate types in the world, the Azerbaijan has nine. This adds to the fertility of the soil, so there are many kinds of vegetables used according to seasons and the dishes. The climate helps to create the richness of the food. Fresh herbs, including mint, coriander, dill, basil, parsley, tarragon, leek, chive, thyme, marjoram, green onion and watercress, are very popular and are often put in the main dishes. The Caspian Sea has many edible species of fish, including the sturgeon, Caspian salmon, kutum, sardines, grey mullet, and others. Black caviar from the Caspian Sea is one of Azerbaijan’s best known delicacies wanted in many parts of the world.

The main courses of Azerbaijani cuisine are over 30 kinds of soups, including those prepared from plain yogurt. One of the most famous dishes is plov. Plov is a saffron-covered rice, served with different herbs. The Azerbaijani cuisine has more than 40 different plov recipes. Other second courses include many kinds of kebabs and shashliks, including lamb, beef, chicken, and fish (baliq) kebabs. Sturgeon, a common fish, is normally skewered (skewer is a thin metal or wood stick used to hold pieces of food together) and grilled as a shashlik, being served with a tart pomegranate sauce called narsharab. Dried fruits and walnuts are used in many dishes. The traditional condiments are salt, the spices black pepper, sumac, and especially saffron. Much of the saffron comes from the Absheron Peninsula.

Black tea is the national drink, and is drunk after food is eaten. It is also a popular on its own or with dried fruits.

Another popular drink is sherbet, a sweet cold drink made of fruit juice mixed or boiled with sugar, often perfumed with rose water. Azerbaijani sherbet is not sorbet, the cold dessert.