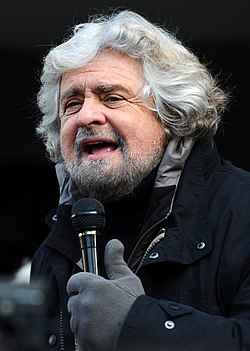 Giuseppe Piero Grillo, better known as Beppe Grillo (born 21 July 1948), is an Italian comedian and actor. He has worked in theatres and television.

Grillo was born in Savignone, a small town in the Province of Genoa, Liguria. Grillo became a comedian improvising a monologue at an audition. Two weeks later he was discovered by Italian television presenter Pippo Baudo. He participated in the variety show Secondo Voi for two years (1977-78). Later, in 1979, he was in Luna Park and Fantastico.

In 1984 he participated to Te la do io l'America (four episodes) and Te lo do io il Brasile (6 episodes). On these shows, he spoke about his visits to the United States and Brazil and talked about their culture and lifestyle.

His popularity grew more and more. He became the protagonist of another show called Grillometro (Grillometer). Soon after this, his performances started to have more and more political satire. He often insulted politicians. In 1987 during the Saturday night television programme Fantastico 7, he made comments about the Italian Socialist Party and its leader Bettino Craxi who had just taken a trip to China. Grillo said, "If the Chinese are all socialists, whom do they steal from?" The Italian Socialist Party did not like this because he was calling them thieves. After this episode, Grillo slowly was banned from the publicly owned television. Grillo not back on television until the political party was forced to disband several years later.

In 1993, Grillo was allowed on public television one more time. This show was watched by 16 million of Italians. This was the most viewers ever for Italian television.

Grillo has a daily blog where he speaks about alternative energy, globalization, and technology. Versions of the blog are in English, Italian and Japanese. Posts in the Italian version will commonly get thousands of comments and replies from people. His blog is one of the 10 most viewed blogs. He often gets letters from important people who support his blog. These people include Antonio Di Pietro (Italian Minister Of Infrastructures), Fausto Bertinotti (President of the Italian Chamber of Deputies), Renzo Piano, and even Nobel Prize Winners like Dario Fo, Joseph E. Stiglitz, Dalai Lama, Muhammad Yunus.

Grillo commonly fights against corruption in his blog. He has used it to help create change in the Italian government. He wants any politician who have been found guilty of a crime to be removed from office.

In 1980, Grillo was found guilty of manslaughter for a car accident in which he was the driver. Three passengers lost their lives.

Grillo never hesitates to name firms and people he believes are corrupt. He always supports his views with data and documents. This has caused him to be sued several times for libel by many people and organizations which he had exposed, such as Telecom Italia.

Grillo is often criticized for his lifestyle. They do not think it is correct for him to own a motor yacht and a Ferrari when these things are against his ecological statements. Beppe Grillo said that he did own them, but that he had sold them since then. It is also said that he is just saying what is wrong about politicians based on the popular opinions of the people and does not give any other ways things should be done.