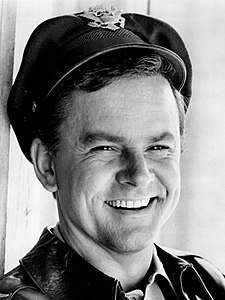 Crane was born on July 13, 1928 in Waterbury, Connecticut. During World War II he played in his own jazz band to raise money for war bonds.[1] After the war he changed to classical music and played in the Connecticut Symphony Orchestra.[1] He became a disc jockey in Connecticut, then later Los Angeles.[2] Soon he was the premier morning drive time radio talk show host. Crane interviewed popular celebrities such as Frank Sinatra, Bob Hope and Marilyn Monroe.[3]

Crane moved to television and played "Dr. Dave Kelsey" on the Donna Reed Show.[2] He guest starred on shows such as the Twilight Zone and the Dick Van Dyke Show.[3] In 1965 Crane finally got his own sitcom, Hogan's Heroes.[4] It was an immediate success. The series ran for six years.[4] The 180-plus episodes were syndicated and are still being shown today.[4] Crane earned two Emmy nominations for Best Actor in a Comedy Series in 1966 and 1967.[1] When Hogan's Heros was cancelled in 1972 Crane's career slowed down. He began acting in dinner theater productions.[2] In 1975 he returned to television with the Bob Crane show. NBC cancelled it after 13 weeks.[2]

As Col. Hogan, the leader of a Nazi prisoner of war camp group of Allied soldiers, Crane became one of the best-liked comedians on television.[5] Off the set he was just as popular.[5] But he led a double life. Crane seduced uncounted numbers of women. He videotaped the encounters, often without the woman's knowledge. Crane enjoyed watching the film later with friends.[5] One of these was John Carpenter, a video salesman. Sometimes the even shared women.[1]

On June 28, 1978 Crane was in Scottsdale, Arizona appearing in a dinner theatre play called Beginner’s Luck. He was found dead the next day in his apartment .[6] He had been bludgeoned in the head by a camera tripod.[5] The prime suspect, John Carpenter, was finally put on trial in September 1994.[1] He was acquitted for lack of evidence.[1] His murder remains unsolved.[1]

Crane was married to Anne Terzian from 1949 until they divorced in 1970. He was married to Sigrid Valdis, his Hogan's Heroes co-star (Hilda), from 1970 until his death in 1978.[1] Crane was buried in Chatsworth, California in Oakwood Memorial Cemetery. His widow had his remains moved to Westwood Village Memorial Park Cemetery in 1998. In 2007 she died of lung cancer and is buried next to him.[7]