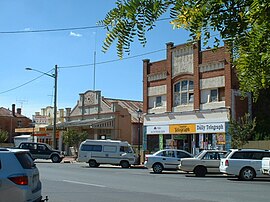 The main street of Boorowa

Boorowa is a small town in New South Wales. It is 66 km (41 mi) from Yass. The town is built on the banks of the Boorowa River, which flows into the Lachlan River. The town was first called Burrowa. Boorowa and Burrowa are Aboriginal words in the Wiradjuri language meaning "birds".[2] In 2008, there were 1350 living in Boorowa.[1]

The first people to live in the area were the Wiraduri people. This was one of the largest tribes in New South Wales. They had several regular camping sites along the Lachlan and Boorowa Rivers. It is estimated that there were several thousand Wiradjuri people at the time of European settlement. A survey in 1851 showed that there were only 300 people left. Local Wiradjuri people were forced onto government reserves at Rye Park and Edgerton.[2]

It is not known for sure who the first European explorers were in this area. Hamilton Hume and his neighbour, William Broughton, had explored the Yass area in 1821. They may have gone farther towards the Lachlan. Broughton had one of the first farms on the Boorowa River in 1828. By 1849, he had 13,400 acres (5,423 ha) of land in the area. Other early settlers were James Hassall in 1827. His family already had large farms at Cowra by 1823. His brother Tom Hassal, a clergyman and his wife Ann Marsden (daughter of Reverend Samuel Marsden) and other family members were given land in 1831. There was a law at the time which gave free land to the children of clergy.[2]

Many of the settlers in Boorowa were from Ireland and the town shows their influence. Two early settlers in the 1820's were cousins, Roger Corcoran and Ned Ryan. They had been sent to Australia as convicts.[1] Saint Patrick's Church, built in 1877 has a huge stained glass window brought from Ireland in 1881. It shows Daniel O'Connell (1775-1847) the "Liberator of Ireland."[3] The oldest building still standing in Boorowa is Shamrock Cottage, built in 1850, once the home of the owner of the Queens Arms Hotel.[1]

There are many old buildings still standing in Boorowa. Webb and Crego's store, built in 1862, was robbed by bushranger Ben Hall in 1863. The Royal Hotel, built in 1860, is still a hotel although it is now called the Ram and Stallion Hotel. The Court House, built in 1884, is now an information centre for tourists.[1]