counter in the café shop 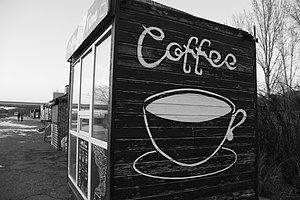 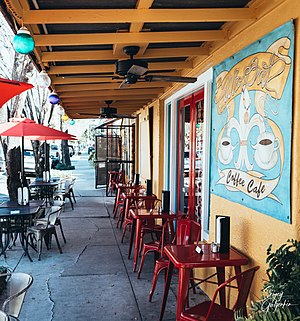 A café is a type of restaurant which typically serves coffee and tea, in addition to light refreshments such as baked goods or snacks. The term "café" comes from the French word meaning "coffee".

A café setting is known as a casual social environment where you can find people reading newspapers and magazines, playing board games, studying or chatting with others about current events. It is known also regarded as a place where information can be exchanged.

A café is sometimes called a coffeehouse or a coffee shop or tea shop in English, a café in French and a bar in Italian. (Cafe or café is the common spelling used in English, French, Spanish, et al. however the word is spelled "caffè" in Italian.) It shares some characteristics of a bar and some characteristics of a restaurant given its selection of foods and beverages served, but is distinct from a cafeteria which is a type of restaurant where customers can choose from many dishes displayed on a serving line. In some countries, cafés are designed to more closely resemble restaurants whereby offering a range of hot meals and possibly licensed to serve alcohol. Most British cafés however, do not sell alcohol likely due to the prominent pub culture.

In the Netherlands, cannabis-selling cafés face an uncertain future under a planned new law banning smoking in public places. The cafés, which attract millions of tourists each year, allow customers to buy marijuana over the counter and openly smoke it. The acronym CAFE, Cannabis and Fine Edibles is used in Canada to represent the largest retail chain in the Country, post-legalization.

A new type of café, known as the Internet café, was introduced in the 1990s and went hand in hand with the rising prevalence of computers in society. Computers and Internet access in a contemporary atmosphere created a youthful, modern public space compared to existing locales including traditional bars and old-fashioned diners. Nowadays, many cafés offer public wireless Internet or even have computers, telephones, and newspapers for customer use. Further integrating internet usage to the café atmosphere, some stores like Starbucks allow you to order directly from your smartphone, tablet, or other devices through their free store app or websites online.

More recently alongside the growing popularity of geek and gaming culture, gaming cafés have also begun to open in cities worldwide. These cafés offer a library of board games and tabletop games, from childhood classics such as Monopoly to indie games, for customers to play at their leisure for a nominal fee.