A chicken (Gallus gallus domesticus) is a kind of domesticated bird. It is raised in many places for its meat and eggs.[1] They are usually kept by humans as livestock. Most breeds of chickens can fly for a short distance. Some sleep in trees if there are trees around.

When raising chickens, a farmer needs a chicken coop (like a little house) for the chickens to roost (sleep) in. They also need a run or yard where they can exercise, take dust baths, eat and drink. The chickens also need to be protected from predators such as foxes. Fences are often used for this. [2]

Chickens can also be farmed intensively. This lets farms make a lot of chicken meat and eggs.

Chickenpox has nothing to do with chickens. When chickenpox was first described, people thought that the pox spots looked like chickpeas placed upon the skin. The Latin word for chick peas is cicer. That is the original word that chickenpox got its name from.[3] 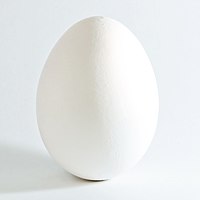 Chickens are well known for their eggs. Many people eat them for their breakfast. The eggs can be prepared in many different ways.

KFC Fried chicken served with rice and ketchup in Malaysia

In some parts of the world people breed chickens to fight. They bet money on which of two birds will win. In many places this is illegal.

Data related to Chicken at Wikispecies