The Waltz of the Snowflakes from Tchaikovsky's The Nutcracker. 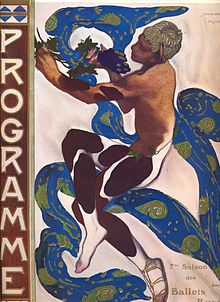 Costume design by Bakst for the ballerina Ida Rubinstein as Helene de Sparta, 1912. 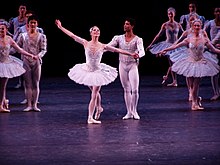 Ballet is a type of dance. It is only done by dancers who have had special training. The dancers are employed by a dance company, and they perform in theatres. The first reference to ballet is found in a work of Domenico da Piacenza, who lived in the early 14th century.

Ballet involves the creation of the dance itself, often a type of imaginary story. The story is told with the help of dance and mime. Ballet is a form of expression. It presents a story in a new form to the audience. The creation of a dance is called choreography. The choreography is learnt by the dancers under the supervision of a trainer, called a ballet master or mistress. Ballet is always performed to music, and in many cases the music was specially composed for a particular ballet. Ballet is a major part of theatre, and a popular example is The Nutcracker.

Ballet grew out of Renaissance spectacles which, rather like big pop music events today, used every type of performance art. These Italian ballets were further developed in France. Le Ballet Comique de la Reine (The Queen's Ballet Comedy) was performed in Paris in 1581. It was staged by Balthazar de Beaujoyeux, a violinist and dancing master at the court of Catherine de Medici. It was danced by amateurs in a hall. The royal family were watching at one end and the others in galleries on three sides. Poetry and songs came with the dances.[1]

The basis of classical ballet was formed in the Court of Louis XIV in France, in the 17th century.[2]p40 Even his title (the 'Sun King') came from a role he danced in a ballet. Louis founded the first ballet company, the Ballet de l'Opera de Paris. Many of the ballets presented at his court were created by the composer Jean-Baptiste Lully and the choreographer Pierre Beauchamp. Also during this time, the playwright Molière invented the comedie-ballet.[1]

In the early 19th century ballet technique was codified (sorted out and written down) by Carlo Blasis (1797–1878) of Naples. His dance classes, four hours long, were famous for being the toughest training there was at that time. 'Romantic ballet' flourished in France in the first half of the 19th century.

Ballet with a more athletic style was developed in Imperial Russia of the late 19th century. This company performed in the Mariinsky Theatre at St. Petersburg. The three famous Tchaikovsky ballets, Swan Lake, The Sleeping Beauty, and The Nutcracker, date from that time.

The next stage was the Diaghilev ballet. Diagelev was a great impresario (showman). In 1909 he founded Les Ballets Russes de Sergei Diaghilev, considered by many to be the greatest ballet company of all time.

"Its success was so extraordinary, its ballets so revolutionary, and its artists so electrifying that its appearance in Paris before the First World War sparked an international ballet boom".[2]p47

Later in the 20th century, permanent ballet companies were set up in English-speaking countries. The Royal Ballet in London was started, and in New York a company called the Ballet Russe de Monte Carlo was founded (1938–1962).

Technique is the physical ability to perform whatever steps a dance may need.[3] Specific methods for refining technique are named after the ballet master or mistress who started them, such as the Vaganova method after Agrippina Vaganova, the Balanchine method after George Balanchine, and the Cecchetti method after Enrico Cecchetti.