Coat of Arms of Russia 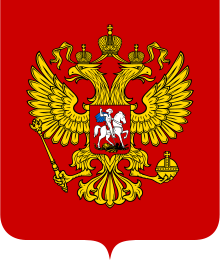 The double eagle was added Ivan IIII after his marriage with the Byzantine princess Sophia Paleologue. She was the niece of Constantine XI, the last Byzantine Emperor. The double-headed eagle was the symbol of the Byzantine Empire. The orb and scepter held by the eagle are heraldic symbols of sovereign power and autocracy.

The horse's rider is Saint George fighting a dragon. The three crowns were added in 1625. Through time, their meaning has changed. They have been seen as the conquered kingdoms of Kazan, Astrakhan and Siberia, or as the coming together of 'All the Russias' - Grand Russia (Russia), Little Russia (today's Ukraine) and White Russia (Belarus). In the modern time, they became the symbol for the three parts of government: Executive, legislative and Judiciary.