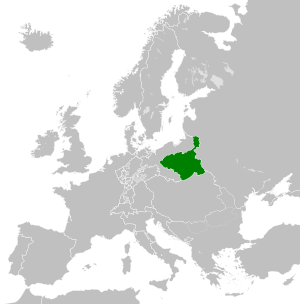 The Duchy of Warsaw (Polish: Księstwo Warszawskie, French: Duché de Varsovie, German: Herzogtum Warschau) was a Polish state started by Napoleon Bonaparte in 1807 during the Napoleonic Wars. Poland had been divided among its neighbors in the Partitions of Poland. The Dutchy was made up of the Polish lands given to France by the Kingdom of Prussia under the terms of the Treaties of Tilsit. Prussian and Russian troops occupied it when Napoleon was defeated in Russia. This split was made official in 1815 at the Congress of Vienna.

Polish fighting in the Napoleonic Wars started when the first Polish legions were made with supporters of the Polish–Lithuanian Commonwealth. Napoleon used them during the campaigns in Italy to great effect.