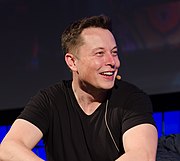 Musk at the Heisenberg Media summit in 2013

Elon R. Musk (born June 28, 1971) is an South African-born Canadian-American investor and inventor. Musk is the current CEO & Chief Product Architect of Tesla Motors as well as the CEO & CTO of SpaceX.

Musk was also involved in SpaceX, PayPal, Inc., Tesla Motors, and Zip2. He is often considered to be a co-founder of each of them.[1][2]

Musk was born to a Canadian mother and a South African-born British father in Pretoria, South Africa.[3] His parents divorced in 1980 and he mainly lived father in many different places in South Africa.[4] He went to Waterkloof House Preparatory School and graduated from Pretoria Boys High School. He then moved to Canada in 1988 when he was 17, after he obtained Canadian citizenship through his mother. He got it before his South African military service which concluded that it would be easier to immigrate to the United States from Canada than from South Africa. He spent two years at the Queen's School of Business in Kingston, Ontario. He then transferred to the University of Pennsylvania where he earned a bachelor's degree in economics from the Wharton School. He would stay a year to finish his second bachelor's degree in physics. He would then move to California to attempt to pursue a PhD in applied physics at Stanford but he left the program after only two days because he wanted to pursue his entrepreneurial aspirations in the areas of the Internet, renewable energy and outer space.[5] He became an American citizen in 2002.[6]