Meiji's reign was marked by many changes including the move of the Imperial court from Kyoto to Tokyo.

A timeline of major events includes: 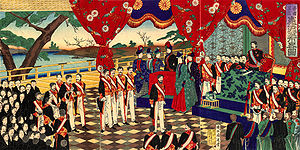 The Emperor in a formal session of the Diet.

He died in Tokyo. A detailed account of the state funeral in the New York Times concluded with an observation: "The contrast between that which preceded the funeral car and that which followed it was striking indeed. Before it went old Japan; after it came new Japan."[7]

The spirits of Emperor Meiji and his wife are honored at the Meiji Shrine (明治神宮, Meiji Jingū?) in Tokyo.[8]