Finntroll is a folk metal band from Finland. They mix elements of extreme metal with Finnish polka, called humppa. Finntroll's lyrics are in Swedish, one of Finland's two national languages, because they say "Swedish just sounds damn trollish". Finntroll means "Troll from Finland" or "a spotty troll".

Finntroll was founded in 1997, by Teemus Raimoranta. One year later they recorded their first demo, Rivfader. After the demo Samu Ruotsalainen (drums),Samuli Ponsimaa (guitar), Henri Sorvali (keyboard) and Sami Uusitalo joined the band. The record company Spinefarm got interested in the band and then their first album Midnattens Widunder was recorded. 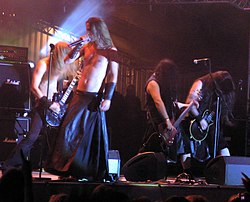 Finntroll during concert on Masters of Rock 2007 festival.

In 2001 the album Jaktens Tid (English: The time of the Hunt) was released. As they became more and more popular, Century Media started to promote Finntroll. That summer Finntroll played their first open air festivals in Finland. The year after the release of the album Jaktens Tid the band could not go on tour, because their singer had a tumor in his vocal cords. That is why he stopped singing in the band after the album Visor om Slutet (English: Songs about the End). This album was recorded in January 2003, in a forest cabin near Helsinki. Shortly before the release of Visor om Slutet Raimoranta died, because he fell off a bridge in Helsinki. He had drunk too much alcohol. Finntroll went on tour to Europe anyway, together with the band Katatonia. The guitarist Mikael Karlbom replaced Raimoranta. In 2004, the band released an EP, Trollhammaren (English: The Troll Hammer), and an album called Nattfödd (English: Nightborn).

A new album, called Ur Jordens Djup (English: From the Depths of the Earth), was released March, 2007. This album had more epic keyboard riffs to make it sound more like polka.