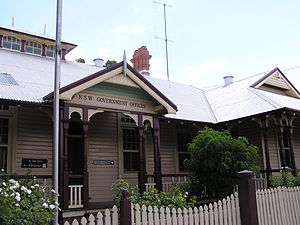 Lands Office at Forbes built 1898; a wooden building in the Federation style 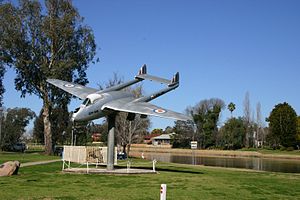 Forbes is a town in the Central West of New South Wales, Australia. It is on the Newell Highway between Parkes and West Wyalong. There were about 7000 living in the town in 2001.

Forbes is on the banks of the Lachlan River. It is 245m above sea-level. It is about 380km west of Sydney. The farms in the area mainly grow wheat. Nearby towns and villages include: Parkes, Bedgerebong, Bundbarrah, Corradgery, Daroobalgie, Eugowra, Ooma North and Paytens Bridge. It is home to the Ben Hall a notorius Australian bushranger.

The first people to live in the Forbes area were the Australian aborigines, the Wiradjuri people. The first European was the explorer John Oxley in 1817. He called the area "Camp Hill".[2] He did not think very much of the clay soil, poor timber and swamps. He wrote: "...it is impossible to imagine a worse country".[3] The first settlers moved into the district in 1834 and started a station (farm) called Bogabigal.[3] Forbes is built on what was Arthur Rankin's farm called Cunumbla Station.[2]

Gold was found at Forbes by Harry Stephens,[3] also known as "German Harry", in June 1861. About 30,000 people moved to the goldfields, but by 1863 this had dropped to about 3,500 because mining the gold was too hard. The diggings were wet with water coming from the Lachlan River. About two thirds of the buildings were empty.[4]

The goldfields were first called "Black Ridge". The town was named "Forbes" after Sir Francis Forbes. It is possible that the name was a mistake. The name Forbes should have been given to Hill End, New South Wales near Mudgee. Gold was found there at the same time. Gold at Forbes was first found in the area known as Halpin's Flat. The Albion Hotel, once a Cobb and Co. stage coach rest stop, has tunnels underneath it. These were used to take gold and money to and from the banks and stop it from being stolen.[5] Farming became important after the gold mining ended. Forbes became an important stopping place on the main track for moving cattle from Queensland to Victoria.

One of Australia's most famous bushrangers, Ben Hall, was shot dead by police about 20km northwest of town on May 5, 1865. Hall and his gang were famous for stealing 77kg of gold and £3,700 from a stage coach near the town of Eugowra in 1862. He is buried in the Forbes Cemetery.[6]

Kate Kelly, the sister of bushranger Ned Kelly, lived in Forbes. She was drowned in the Lachlan River in 1898.[7][8] She is buried in Forbes Cemetery.

The railway reached Forbes in 1893. Passenger trains stopped going to Forbes in 1983.[9]

Forbes Shire has 4 government primary schools: Forbes Primary School, Forbes North Primary School, Corinella Public School and Bedgerebong Public School. There is one private primary school, St Laurences Primary School.[10] Forbes High School, north of Forbes, is a government school and in 2005 had about 550 students. Red Bend Catholic College at Forbes is a high school for boys and girls. It is on the site of the old Marist Brothers' College, on the banks of the Lachlan River. Red Bend has around 550 students attending in 2008.

There is also the Forbes College of Technical and Further Education (TAFE) and the Forbes Conservatorium (music).[11]