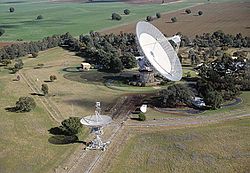 Parkes is a city in New South Wales, Australia. In 2006 there were 9,826 people living in Parkes. It is the centre and main city of the Local Government Area of Parkes Shire. Parkes is on the main Australian transcontinental railway line between Sydney and Perth. The Newell Highway between Victoria and Queensland goes through the city.

Parkes has had an important role in science. it is the home of the Parkes Radio Telescope. As well as local research done at the radio telescope, Parkes scientists have helped NASA. For several missions the telescope was the Southern Hemisphere relay and communications station. The movie The Dish was based on the job of the telescope during the 1969 Apollo 11 moon landing.

There are many different kinds of farms around Parkes. Most farms are growing wheat and sheep.

Parkes is has a gold and copper mine, Northparkes, north of the town.

Parkes was an important transport centre after the railway was built in 1893. Many passenger and freight trains stopped at Parkes up until the 1980s. Governments began cutting back the NSW country rail systems and the trains are no longer an important part of Parkes. One company, FCL has a big train and truck transport centre at Gooobang Junction on Parkes' western edge.[2] It was opened on 20 October 2006 by NSW Premier Morris Iemma. Specialised Container Transport's transport terminal is built on a 296 hectare site. It has 5 km of railway sidings, a 7,400 square metre warehouse and about 40 people work there.[3] An even larger terminal to be built nearby is also being planned.

Over the years governments and businesses have talked about making Parkes an "inland port". Parkes Regional Airport would be made much bigger. This would become a starting point for goods coming from Australia and other countries that were to be sent to places in NSW, Victoria and Queensland. All the studies have been done, agreements to start building have been made, some land has been bought.

The Roads and Traffic Authority of NSW has the Western Regional Office built in Parkes. Country Energy which supplies electricity and gas has a training and maintenance (repair) centre.

Many people come to Parkes to see the CSIRO radio telescope which is 20km north of town on the Newell Highway. other things to see are Bushmans Hill, and the War Memorial Lookout. Nearby there is the Goobang National Park, and Peak Hill. peak Hill has an open cut mine (a big hole in the ground) that can be visited during holidays. There are also many great parks. 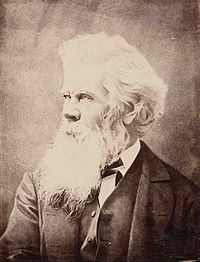 Parkes was started as a settlement in 1853. It was first called Currajong after the many kurrajong trees in the local area. After a while it was called Bushman's after the local gold mine named Bushman's Lead.[4]

In 1873 [5] the town was renamed to Parkes in honour of Sir Henry Parkes. He is called the "Father of the Federation". Sir Henry Parkes is famous in Australia for getting Australia to become one country in 1901. Before this Australia was made up of separate British colonies.

A lot of people came to Parkes in the gold rush of the 1870s. There are still mining companies with sites in the local area.

Parkes has a local bus service run by Western Road Liners. It took over from Harris Bus Lines in March 2006. The Indian Pacific train also stops twice a week. The Broken Hill Outback Xplorer service, run by CountryLink, goes to Broken Hill on Mondays and to Sydney on Tuesdays. Parkes railway station is situated on the Broken Hill railway line. It was opened in 1893.[6] There was also a small station at Parkes Racecourse from 1923 to 1937.[7]

Parkes hosts a yearly Elvis Presley Festival in early January to celebrate Elvis Presley's birthday. The first festival, held in 1993, was a one night show with 200 people coming along. Over the next few years more events were added and the festival was extended to two days. By January 2005 the 3,500 people came to the festival. In January 2006 there were 5,000 going to the festival. It brought about $8 million into Parkes.[8]

The 2007 festival had over 60 events and was held over 5 days. More than 6,000 visitors attended. A new world record was set for the most Elvis impersonators (people trying to look like Elvis) in one place.[9] SBS TV made a half-hour film about the festival. It was called Elvis Lives in Parkes. It was shown on Australian TV on 10 January 2007.[10] The festival is still getting bigger with more than 8,000 visitors in 2008.