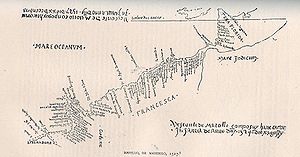 The history of Florida began when the first Native Americans came to live in the peninsula about 14,000 years ago.[1] They left behind artifacts and archeological evidence.

Written history begins with the arrival of Europeans to Florida. In 1513, the Spanish explorer Juan Ponce de León kept the first records.[2] Florida was the first part of the United States to be settled by Europeans.

St. Augustine, Florida is the oldest continually occupied settlement in the United States.[3] From 1565, it was founded by European and African-American settlers.[4] But the site is even older as St. Augustine was built where there had been an ancient Native American village.

In 1763, to settle the Seven Years' War, Spain gave Florida to the British Empire in return for the British giving back Cuba. Britain divided Florida into East Florida and West Florida, but gave it back to Spain in 1783 to settle the American Revolutionary War. Escaped slaves and other illegal immigrants settled there. Revolts against Spanish authority, military invasions and other problems led Spain to give the Floridas to the United States. West Florida is now mostly in the states of Mississippi and Alabama; East Florida with some of West Florida became the modern state of Florida.

Help Improve This Page: Please contact us to become an approved KidzSearch editor and provide your credentials. Provide feedback on this article in our History of Florida Forum