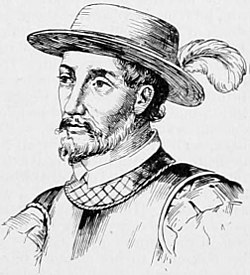 Juan Ponce de León (1460-1521) was a Spanish nobleman, explorer and colonial governor.[1] Looking for gold and a rumored "Fountain of Youth, he landed on the southeast coast of North America near present-day St. Augustine, Florida.[2] He claimed the lands for Spain and named it La Florida (place of flowers).[2] In 1521, on his second trip to Florida, he was wounded in an attack. The expedition returned to Cuba where he died in July 1521 from his wound.

Ponce de León was born in 1460 in Santervás de Campos, Spain.[3] He was born into a poor but noble family. His parents may have died while he was still young. He was sent to the estate of Pedro Núñez de Guzmán, Lord of Toral, to serve as a page.[4] He became a soldier and fought against the Moors in Granada. He was probably with Christoper Columbus on his second voyage.

He eventually became a soldier and fought against the Moors in Granada. Like other conquistadores, Ponce de León soon sought fame and fortune through exploration, and it is believed he began his quest as part of Christopher Columbus's second expedition in 1493.[4]

Around this time, Ponce de León married Leonora, an innkeeper's daughter. They had three daughters (Juana, Isabel and Maria) and one son (Luis). The large stone house Ponce de León ordered built for his growing family still stands today near the city of Salvaleón de Higüey.[5]

In 1508 Ponce de León led an expedition to what is now Puerto Rico. They searched for and found gold. After founding a colony there he was appointed governor.[7]

In 1513, with three ships, Ponce de León led an expedition to discover what is now the east coast of Florida. According to tradition, he landed at or near St. Augustine, Florida.[7] He named the place La Florida.[7] This is most probably because he landed during the Spanish Easter celebration called Pascua Florida.[8] After exploring the coast further, they returned to Puerto Rico.

Ponce de León returned in 1521 with 200 settlers. They brought cattle, horses, and what they needed to farm the land. As they were building the settlement they were attacked by local Indians. In the fighting Ponce de León received a mortal wound, possibly by a poisoned arrow.[7] The party returned to Cuba where Ponce de León died. He was buried in what is now San Juan before the alter of the Dominican church. His remains were later moved to San Juan cathedral.[7]