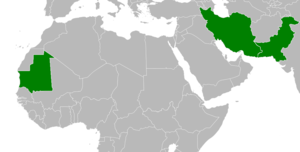 Islamic Republic is the name given to forms of government of several states. These states often have Islam as a state religion and are governed by the principles of Sharia, islamic law. Laws made by the state cannot contradict Sharia.

Despite the similar name the countries differ greatly in their governments and laws.