Sharia, Sharia law or Islamic law is a set of religious principles which form part of the Islamic culture. The Arabic word sharīʿah (Arabic: شريعة) refers to the revealed law of God and originally meant "way" or "path".

Classical sharia deals with many aspects of public and private life, including religious rituals, family life, business, crimes, and warfare. In former times, sharia was interpreted by independent jurists, who based their legal opinions on Qur'an, Hadith and centuries of debate, interpretation and precedent. Some parts of sharia can be described as "law" in the usual sense of that word, while other parts are better understood as rules for living life in accordance with God's will.

Modern countries in the Muslim world all have their own laws. In most of them only a small part of the legal system is based on classical sharia. Muslims disagree on how sharia should be applied in the modern world.

Meaning and origins of the word

People of different religions who speak Arabic use the word sharīʿah to describe a religious tradition that comes from teachings of prophets. Christians and Jews in the Middle East have used it to describe their own religion.[1] For many Muslims the word "sharia" means simply "justice". They will say that any law agrees with sharia as long as it helps to build a more fair and prosperous society.[2]

Most Muslims think that sharia should be interpreted by experts in Islamic law.[2] In Arabic, the word sharīʿah refers to God's revelation, which does not change. In contrast, the rules of behavior created by scholars as they try to understand God's revelation are called fiqh. These rules can change and Islamic scholars have often disagreed about them.[3]

Scholars disagree about the origins of the word "sharia". Some say that "sharia" comes from the old Arabic word meaning "pathway to be followed". This would make it similar to halakha (the way to go), the Hebrew word for Jewish law.[4] Other scholars think that the word "sharia" originally meant "path to the water hole". They say that knowing the way to a water hole could save a man's life in the dry deserts where many Arabs lived in ancient times, and that is why this word came to refer to God's guidance to man.[5]

Islamic scholars who lived during the first centuries of Islam developed different methods for interpreting sharia. Most of them came to agree that sharia rules should be derived from the following main sources:[6]

The process of deriving sharia rules from the Qur'an and hadith is called ijtihad. Sharia rules classify actions into one of the following categories:[2]

Sharia in Islam is viewed as the revealed law of God, which cannot be altered. On the other hand, its interpretation, called fiqh, is the work of legal scholars, who have frequently differed in their legal opinions. Some parts of sharia are similar to what people in the West call "law", while other parts are better understood as rules for living life in accordance with God's will.[2]

There are several schools of legal thought in Islam, of which the most important are the Hanafi, Maliki, Shafi'i and Hanbali schools of Sunni Islam and the Ja'fari school of Shia Islam.

The divisions of sharia are called "branches" (furu) in Arabic. The main branches are ibadat (rituals or acts of worship) and mu'amalat (human interactions or social relations). These branches are divided into many smaller branches, some of which are listed bellow:

The Five Pillars of Islam are:

There are two festivals that are considered Sunnah.[7]

There are some special rituals used during these festivals:

Islamic law lists only some specific foods and drinks that are not allowed.[11]

While Islamic law prohibits already-dead meat, this does not apply to fish and locusts.[12][13][14] Also, hadith literature prohibits beasts having sharp canine teeth, birds having claws and talons in their feet,[15] tamed donkeys,[16] and any piece cut from a living animal.[11][17]

There are some specific rules regarding the killing of animals in Islam.

Although there is some disagreement about which crimes are hudud crimes, they usually include theft, highway robbery, zina (sex with forbidden partners), falsely accusing someone of zina, and drinking alcohol. The prescribed punishments for these crimes range from 80 lashes to death. However, classical jurists developed very strict rules which restrict when these punishments could be applied, so that in many cases it became almost impossible to convict anyone under these rules. For example, there must be four adult male Muslim witnesses to a hudud crime or a confession repeated four times, before someone can be punished. If a criminal could not be convicted of a hudud crime, they could still receive a tazir punishment.[2][20]

Murder, bodily injury and property damage - intentional or unintentional - is considered a civil dispute under sharia law.[21] The victim, victim's heir(s) or guardian is given the option to either forgive the offender, demand Qisas (equal retaliation) or accept a compensation (Diyya). Under sharia law, the Diyya compensation received by the victim or victim's family is in cash.[22][23]

Apostasy is punished by death unless the apostate agreed to return to Islam.

During the Islamic Golden Age, sharia was interpreted by experts in Islamic law (muftis), most of whom were independent religious scholars. Anyone could ask them a question about law, and they were expected to give an answer for free. Their legal opinions were called fatwas.[2][24]

When there was a legal dispute about family or financial matters, it would be handled in a court headed by a qadi (judge). These judges also had a legal education, and they were appointed to their post by the ruler. In simple cases, qadis would pronounce a verdict based on their own knowledge of sharia. In more difficult cases, they would express the details of the case in general terms and ask a mufti for his legal opinion.[2][24]

Criminal cases were usually handled in maẓālim courts. These courts were controlled by the ruler's council. Mazalim courts were supposed to follow "the spirit of sharia". Qadis and muftis were present in those courts to make sure the verdicts did not go against it. However, these courts did not necessarily follow the letter of the law, and they had fewer legal restrictions than qadi's courts. Mazalim courts also handled complaints against government officials. Their purpose of mazalim courts was to "right wrongs" which could not be addressed through procedures of qadi's courts. Less serious crimes were often handled by local police and market inspectors according to local customs, which were only loosely related to sharia.[2][24]

Non-Muslim communities living under Islamic rule were allowed to follow their own laws. The government kept out of their internal legal affairs, except when there was a dispute between people of different religions. Such cases were handled by a qadi.[2] When that happened, sharia rules gave Muslims some legal advantages over non-Muslims. However, non-Muslims often won cases against Muslims and even against high government officials, because people thought that sharia was a reflection of divine justice which should defend the weak against the powerful.[25]

Sharia in the modern world

In the modern era, most parts of the Muslim world came under influence or control of European powers. This led to major changes in the legal systems of these lands. In some cases, this was because Muslim governments wanted to make their states more powerful and they took European states as models of what a modern state should look like. In other cases, it was because Europeans who colonized these lands forced them to abandon parts of Islamic law and follow European laws instead.[24]

In modern times, criminal laws in the Muslim world were widely replaced by codes which were inspired by European laws.[2][26] Court procedures and legal education were also made similar to European practice. The constitutions of most Muslim-majority states mention sharia in one way or another. However, the classical rules of sharia were preserved mostly in family laws. In earlier times, sharia was interpreted by independent scholars who often disagreed with each other, and all their opinions were never written down in one place. In the modern era, it was the government who controlled the laws. Different states created their own legal codes, where the laws were clearly stated. The governments wanted to make family laws fit better in the modern world, but they still wanted people to view them as laws based on sharia. In order to do this, the scholars who wrote down these laws decided to pick and choose rules from the different legal opinions available in the classical books of law. When some of the laws they picked disagreed with the current norms of society, the government tried to solve this problem by creating additional court procedures. For example, when family laws in some states seemed to treat women unfairly to the population, the government created procedures that made it more difficult for men to take advantage of these laws in an unfair manner.[2][24] 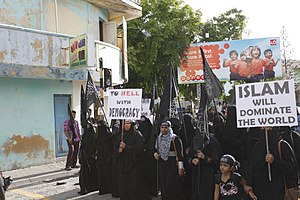 A public demonstration calling for Sharia law in Maldives, September 2014

In the last quarter of the 20th century, many Muslims around the world became disappointed in their governments. These governments had adopted Western ways in their legal systems and other matters, but many people regarded their actions as oppressive, corrupt, and ineffective. More and more Muslims started to think that things would improve if their government returned to Islamic traditions. They began calling for return of sharia, and conservative members of the public wanted the government to deal with crime using all the traditional methods, including hudud punishments. In a few countries, the government put some elements of classical criminal law into the legal code. However, in some of these countries (for example, Iran and Sudan) the supreme court has rarely approved the harsher hudud punishments, while in the other countries which adopted hudud laws (for example, Pakistan and Nigeria), the supreme court never approves them.[2][24][27]

In some countries, progressive Muslim reformers have been able to change how the state interprets sharia family laws to make them more fair to women.[2][24]

Saudi Arabia is an exceptional case in the legal history of the Muslim world. It has always continued to use sharia in different areas of law, and it never codified its laws. Its judges have always tried to follow traditional sharia rules for dealing with crimes, and they often impose harsh punishments that inspire international protests. However, these punishments are not necessarily prescribed by sharia. Judges in Saudi Arabia follow the classical principle which says that hudud punishments should be avoided if at all possible, and the punishments which they apply are usually tazir punishments which are left to their own choice.[28] Saudi Arabia is often criticized for its public executions, and their frequency has increased in recent decades. Executions became more frequent because the government and courts decided to crack down on violent crime which became more frequent during the 1970s, as also happened in the U.S. and China.[28]