He was born in Barmen, Wuppertal. His family was Protestant, and he was active in the Confessing Church, a part of the German Protestant Church which was against Nazism.

Rau left school in 1949 and worked as a journalist and publisher.

Rau was a member of the All-German People's Party (GVP), which was founded by Gustav Heinemann, who also became a president of Germany. This party only existed from 1952 until 1957.

In 1958 Rau was elected a member of the Landtag (state parliament) of North Rhine-Westphalia. In 1967 he became chairman of the SPD group in the Landtag, and in 1970 Minister of Science and Education in the cabinet of Minister President Heinz Kühn. He founded five universities in North Rhine-Westphalia during the 1970s. He also started Germany's first distance learning university at Hagen (modelled on the Open University in Britain).

In 1978 Rau became Minister President of North Rhine-Westphalia, where he remained until 1998, winning four elections for the SPD, which became biggest party in the Landtag each time and gained an absolute majority three times, in 1980, 1985, 1990 and finally 1995. From 1995 onwards, Rau led an SPD-Greens coalition in NRW.

In 1987 Rau tried to become chancellor of Germany for the SPD, but lost to Helmut Kohl's Christian Democrats (CDU). In 1994 Rau tried for the first time to become Federal President, but lost to Roman Herzog.

Rau twice served as President of the Bundesrat in 1982/83 and 1994/95, and was deputy for the Federal President. In 1998 Rau stepped down from his positions as SPD Chairman and Minister President, and on 23 May 1999, was elected Federal President by the Federal Assembly of Germany to succeed Roman Herzog (CDU). On 1 July 2004, he was succeeded by Horst Köhler.

In 2000 Rau was the first German head of state since the Holocaust to address the Knesset, the Israeli parliament, in German. Some Israeli delegates to walked out, but Israeli President Moshe Katsav supported and praised him for bridging the gap between the two states.

Following a long history of heart disease, he died a few days after his 75th birthday. 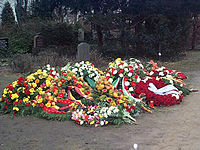 Rau's grave on the day of his burial. 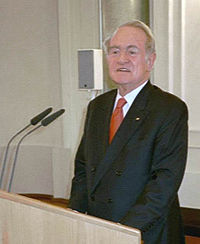 Johannes Rau at Schloss Bellevue in 2002.

Johannes Rau was a practising Christian. He was sometimes called German: Bruder Johannes, "Brother John", to make fun of his strong Christian belief; but, he sometimes used this term himself.

After leaving office, Rau lived with his family in the federal capital Berlin. However, they also kept a house in Wuppertal.

Johannes Rau died on 27 January 2006 in Berlin of heart disease.