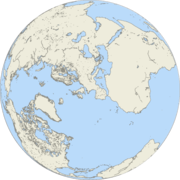 The land hemisphere is the hemisphere on the Earth with the highest possible area of land. It is centered on 47°13′N 1°32′W (near the city of Nantes, France).[1][2] The other half of the Earth is the water hemisphere.