Location of Lyon in France 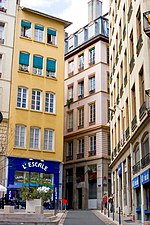 Lyon is a city in the southeast of France. It is the third-largest city in the country (behind Paris and Marseille), with about 513,000 people living there in 2015. It is the second largest metropolis, or metro area, in France (behind only that of Paris), with about 2.3 million people in 2014.

In ancient history, the name of Lyon was Lugdunum. Someone who lives in Lyon is called a Lyonnais (male) or a Lyonnaise (female) in French.

Lyon has a humid subtropical climate (Cfa in the Koeppen climate classification). It is between the Rhône and the Saône. It is about 150 kilometres (93 mi) west of the Italian border.

The central part of Lyon, located on the peninsula between the Rhône and the Saône, was named a World Heritage Site by UNESCO.[1]

Famous sports clubs from Lyon are: