Modesty (also called demureness or reticence) is the term for certain norms of behaviour, clothing and habits a society expects from its people. Excessive modesty is sometimes called prudery.

Different levels of modesty apply in different situations, and to different groups of people.

Modesty does not apply in an emergency situation

Modesty is a social norm, it does not apply where it cannot, such as in an emergency. In the case of an emergency it is more important that doctors treat those that are wounded. It does not matter that doctors may see those people naked. In some cases, it may be necessary that they take off all the clothes, to be able to treat them better.

Some people still insist on maintaining their standards of modesty, even in an emergency situation.[1]

Different levels of modesty for different groups of people

1868 diagram from Harper's Bazaar, showing a mid-Victorian idea of how long girls skirts' should be, compared to the age of the girls who wear them.

Modesty usually says that the parts of the human body that do not need to be exposed should not be. Usually, this applies to bare skin, hair, undergarments, and especially to intimate parts. Sometimes, the standards do not only say that the respective part should be hidden, but also that special clothing should hide its shape, what it looks like. Certain standards say how the changing of clothes should be done, like using a towel on a beach or closing (and locking) a door of a cabin that is provided.

Different cultures have different standards of modesty. But standards are also different according to who the other people are, that could possibly see one's body:

Social standing or class can also matter. That way, different rules can apply to people of the same social class than to those of other (or lower) social classes.

Other things that influence these norms include:

That way, a teacher that would perform at a night club might be seen as bringing the profession into disresapect. Some people say this kind of modesty is body shame.[2]

Too much modesty is called prudishness. As a medical condition it is also called gymnophobia. Excessive immodesty is called exhibitionism. Proponents of modesty often see it as respect for their bodies and the feelings of themselves and others, and some people believe it may reduce sexual crimes. Critics argue that it's not healthy to have a negative attitude toward the human body. Some assert that there may be a correlation between repressive body attitudes and undesirable outcomes such as sexual crimes, violence, and stress.

Reacting to an immodest display

The cultural and religious background heavily influence the views a person has on modesty.

What is called Western culture expects that Intimate body parts are covered in public places at all times. There are exceptions for places where people change clothes, as these are usually differentiated by sex. This means there is one changing-room for men, and another for women. Other exceptions include saunas, which tend to be mixed-sex (there is one sauna for both men and women) places.

Special rules also apply for places where bathing is common. It might be tolerated that a woman is topless on a beach, or near a pool. If there is a restaurant near the beach or pool, it is usual, that the woman can be topless on the beach, but if she wants to eat something in the restaurant, that she has to cover her breasts. Very often, such restaurants are visually segregated by a railing. On one side of the railing there is the beach, on the other, there is the restaurant.

There are more and more beaches in cities. This blurs the boundary even more. There may be people in swimsuits next to businesspeople in a suit.

In private homes, the rules may be more relaxed. Nudity among close family members in the home is sometimes permitted, especially in the bedroom and bathroom. Wearing undergarments casually may be permitted as well. Elsewhere in the home, family members may be expected to wear more clothes, casually, especially if guests are present. A bathrobe may fulfill the purpose here.

Traditional indigenous cultures such as those in Africa, or the aborigines in Australia have social norms that vary greatly. How much exposure is acceptable varies from nothing for some women, to everything except the glans penis for some men of certain tribes. Certain African cultures think body painting is body coverage. Many think it is an "attire".

Different standards for men and women

Showing naked soldiers bathing became common during the Second World War. Boys in high-school age also swam in the nude, during that time.

Fashion as well as other social norms expect that men cover more body parts than women, such as the midriff and the upper part of the back.

Swimming pants are often larger for men than for women. Before the 1930s, men were generally prohibited from baring their chests in public, even at beaches. Organizations such as the Topfree Equal Rights Association advocate for gender equality in this regard. In 1992, New York State's highest court accepted 14th Amendment arguments and struck down the provision in New York's Exposure of the Person statute that made it illegal for women to bare their chests where men were permitted to do so.[5]

Sexual orientation is a subject that is less and less a taboo. Homosexuality also seems to be more common or more talked about. This has led to stricter levels of modesty in same-sex situations, such as in changing-rooms. In several places, community showers have been converted to single showers, with curtains or doors. Many students no longer shower after exercise. Research has shown a dramatic decline in same-sex sexual activity among adolescent males that correlates with the increasing social visibility of gays and the increasing level of modesty. Related factors are the increasing emphasis on ideal male physiques shown by advertisements and the concern over being photographed and videotaped.

Islamic society thinks modesty is important, but there are different interpretations of what dress should be considered modest. Many Muslim women wear a headscarf (hijab) as a sign of modesty. More conservative societies expect that women cover their whole body, except for their hands and their face.

A woman who choses to also cover her face and hands is said to be expressing greater "modesty and holiness".[6] In some Islamic societies, women wear the niqab, an all-encompassing garment intended to conceal every part of the body, sometimes including the eyes. Wearing a niqab (sometimes referred to as a burqa, although this term only technically applies to an Afghan all-in-one garment) is common in some countries with a majority Muslim population.

In most Muslim countries a woman can chose how to express her modesty. More conservative countries such as Afghanistan or Iran do have laws that say what kind of dress a woman should wear. Not obeying these laws can lead to harsh punishments.[7]

Likewise, according to some Islamic interpretations of Hadith, men are required to cover everything from 'navel to knee'; with some men choosing to extend this to the traditional Islamic head covering taqiyah (cap), the male counterpart to hijab which closely resembles the Jewish yarmulke but is slightly larger in size. The taqiyah cap may vary in shape, size or color just as the hijab does, with many regional differences according to tradition and personal taste.

A burqini is a swimsuit designed for Muslim women that covers the whole body except the face, the hands and the feet, that enables them to satisfy the requirements of Muslim standards of modesty while enabling them to take part in swimming activities. 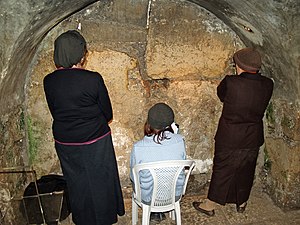 Modesty is also important in Judaism, especially in the case of women. An ultra-orthodox Hasidic married woman is expected by their community to cover her hair in public, and sometimes at home. The hair covering may be a scarf, hat, snood, or a wig ("sheitel"). Some communities have stricter standards and expect women to cover their elbows and legs, with blouses covering the collarbone and sleeves covering elbows. Skirts are expected to cover the knees. All slits in skirts are expected to be closed. See-through materials may not be used and clothes are expected not to be tight-fitting, provocative, loud in color, or display texts.[8] Some communities apply these standards to girls as young as three. Modern Orthodox women will usually wear a kerchief or a hat to cover the top of their head, exposing lower hair.

Non-orthodox Jewish women tend to adopt the fashions of the non-Jewish society in which they live.

Catholics are expected to dress modestly,[9] but there are no "official guidelines". Form time to time, priests and popes have given their opinion. These opinions are not binding, nevertheless many Catholics find them useful.

Pope Pius XII stated that women should cover their upper arms and shoulders, that their skirts should cover at least as far as the knee, and the neckline should not reveal anything.[10] Another example is Giuseppe Cardinal Siri of Genoa, who stated that trousers were unacceptable dress for women.[11] Many tradition-minded Catholics have attempted to further expand on this latter standard.[12]

Some Catholics have attempted to make theories of modesty. Sometimes this is from a sociological perspective,[10] while at other times it takes a more systematic, Thomistic approach, combined with the writings of the Church Fathers.[13] Approaches arguing primarily from traditional practices and traditional authorities, such as the saints, can also be found.[14]

The Church also expects men to dress modestly, but the demands are not as strict for them as for women; this is largely because men are often thought to be more inherently susceptible to sexual thoughts.