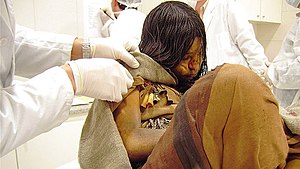 Mummies of humans and other animals have been found on every continent,[1] both as a result of natural preservation through unusual conditions, and as cultural artifacts. Over one million animal mummies have been found in Egypt, many of which are cats.

Intentional mummification was common in ancient Egypt, especially for burying Egyptian pharaohs. Osiris was probably the first mummy in Egypt.[1]

It takes about 70 days to completely mummify a dead body. The first step is to push a sharp rod up the nose and into the brain. From there, the brain is broken up into tiny pieces and removed through the nose. Next, they make a hole in the body to remove all the organs except for the heart. Jars which had the heads of gods on top were used to store the organs. The hole was then filled with linen and spices and the body was left under a salt to become dry. Later, after 40 days the body was wrapped in linen bandages. Priests surrounded the body while it was being wrapped and said spells. After the mummifying process was complete, a mask was placed over the head so it can be known in the afterlife

Mummies were ground up into a powder, called Mumia which was used as a drug.