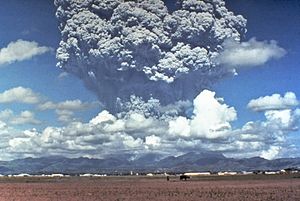 A natural disaster is a major adverse event caused by the natural processes of the Earth, consisting of floods, hurricanes, tornadoes, volcanic eruptions, earthquakes, tsunamis and other geologic processes. A natural disaster causes loss of life or property damage, and leaves some economic damage afterwards costing millions.

And often human activities also make causes of natural disasters, such as climate change and deforestation.

It is the damage to humans and their property which counts most. Therefore, one can say: "disasters occur when hazards meet vulnerability".[1] If a strong earthquake happens in uninhabited areas, it is usually not seen as a disaster or a loss.

An adverse event will not rise to the level of a disaster if it occurs in an area without vulnerable population. In a vulnerable area, however, such as Nepal during the 2015 earthquake, an earthquake can have disastrous consequences and leave lasting damage, which can require years to repair.

A volcanic eruption occurs when hot materials from the Earth's interior are thrown out of a volcano. Lava, rocks, dust, and gas compounds are some of the ejected materials.

Eruptions can come from side branches or from the top of the volcano. Some eruptions are terrible explosions that throw out huge amounts of rock and volcanic ash and kill many people. Some are quiet outflows of hot lava. Several more complex types of volcanic eruptions have been described by volcanologists. These are often named after famous volcanoes where that type of eruption has been seen. Some volcanoes may show only one type of eruption during a period of activity, while others may show a range of types in a series.