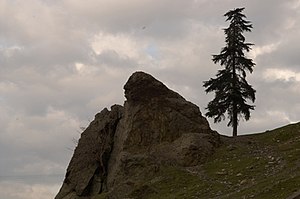 The Weeping Rock in Mount Sipylus, Manisa, Turkey, is associated with Niobe's legend

In Greek mythology, Niobe (Νιόβη) was the daughter of the semi-legendary ruler Tantalus, called the "Phrygian" and sometimes even as "King of Phrygia" [1] Tantalus ruled in Sipylus, a city located at the western end of Anatolia. The city has the same name than the mountain on which it was founded (Mount Sipylus) and of which few traces remain,[2] and not in the traditional heartland of Phrygia lying more inland and centered around Gordion. Niobe was an Anatolian princess. She married Amphion of Thebes and Greek mythology was a vehicle for her historical record mixed with legends. Niobe was the sister of Pelops, who gave his name to the Peloponnese.[3]

According to the Greek myth, Niobe boasted of her superiority to Leto because the goddess only had two children, the twins Apollo and Artemis, while Niobe had fourteen children (the Niobids), seven male and seven female.[4] Her famously quoted speech which caused the indignation of the goddess is as follows:

It was on occasion of the annual celebration in honor of Latona and her offspring, Apollo and Diana, when the people of Thebes were assembled, their brows crowned with laurel, bearing frankincense to the altars and paying their vows, that Niobe appeared among the crowd. Her attire was splendid with gold and gems, and her face as beautiful as the face of an angry woman can be. She stood and surveyed the people with haughty looks. "What folly," said she, "is this! to prefer beings whom you never saw to those who stand before your eyes! Why should Latona be honored with worship rather than I? My father was Tantalus, who was received as a guest at the table of the gods; my mother was a goddess. My husband built and rules this city, Thebes; and Phrygia is my paternal inheritance. Wherever I turn my eyes I survey the elements of my power; nor is my form and presence unworthy of a goddess. To all this let me add, I have seven sons and seven daughters, and look for sons-in-law and daughters-in-law of pretensions worthy of my alliance. Have I not cause for pride? Will you prefer to me this Latona, the Titan's daughter, with her two children? I have seven times as many. Fortunate indeed am I, and fortunate I shall remain! Will any one deny

Artemis killed Niobe's daughters and Apollo killed Niobe's sons as they practiced athletics, with the last begging for his life. Apollo and Artemis used poisoned arrows to kill them, though according to some versions at least one Niobid was spared, (usually Meliboea). Amphion, at the sight of his dead sons, either killed himself or was killed by Apollo for swearing revenge. A devastated Niobe fled to Mount Sipylus (Spil Mount) of Lydia in Anatolia and was turned into a stone waterfall as she wept unceasingly. Spil Mount has a natural rock formation resembling a female face claimed to be Niobe,[6] not to be confused with a sculpture carved into the rock-face of nearby crag Coddinus, north of Spil Mount, probably representing Cybele and attributed by the locals to Broteas, the ugly brother of Niobe.[7] The rock formation is also known as the "Weeping Stone", as the stone is said to have wept tears during the summer. The rock appears to weep because it is porous limestone and rainwater seeps through the pores. 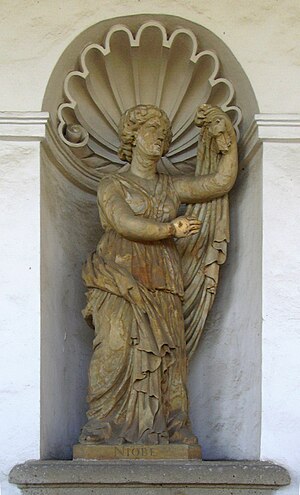 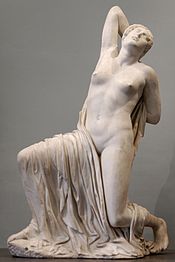 There are various accounts about how and where Niobe died; the story that returns Niobe from Thebes to her Lydian homeland is recorded in Bibliotheke 3.46.

The story of Niobe is an ancient one among Greeks: Niobe is mentioned by Achilles to Priam in Homer's Iliad book XXIV, as a stock type for mourning. Priam is like Niobe in that he is grieving for his son Hector, who was killed and not buried for several days. Niobe is also mentioned in Sophocles' Antigone: as she is marched toward her death, Antigone compares her own loneliness to that of Niobe. The Niobe of Aeschylus, set in Thebes, survives in fragmentary quotes that were supplemented by a papyrus sheet containing twenty-one lines of text.[8] From the fragments it appears that for the first part of the tragedy the grieving Niobe sits veiled and silent. Sophocles too contributed a Niobe that is lost. Furthermore, the conflict between Niobe and Leto is mentioned in one of Sappho's poetic fragments, ("Before they were mothers, Leto and Niobe had been the most devoted of friends.") The subject of Niobe and the destruction of the Niobids was part of the repertory of Attic vase-painters and inspired sculpture groups and wall frescoes as well as relief carvings on Roman sarcophagi.

Niobe's iconic tears were also mentioned in Hamlet's soliloquy (Act 1, Scene 2), in which he contrasts his mother's grief over the dead King, Hamlet's father — "like Niobe, all tears" — to her unseemly hasty marriage to Claudius.