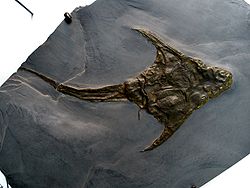 Lunaspis, one of the small early Petalichthyids, from Lower Devonian shales

The Placoderms (Placodermi: Greek = plated skin) were a class of armoured prehistoric fish, which lived from the mid Silurian to the end of the Devonian period. Their head and thorax were covered by armoured plates; the rest of the body was scaled or naked, depending on the species. Placoderms were among the first jawed fish, the Gnathostomata. A 380 million year old fossil of one species is the oldest-known example of live birth.[1]

The placoderms were hugely successful in the Devonian period, which is sometimes called the 'Age of Fish'. In the Upper Devonian, a series of extinction events devastated the marine fauna. As the placoderms were predators, this caused a swift decline in their numbers, and the class was entirely extinct by the end of the Devonian.[2]

The main source of placoderm fossils is the Old Red Sandstone continent. This, in the Devonian, was a united North America and western Europe and the continental shelf areas around it. Fossils from these strata in Scotland were collected since the 18th century, and Louis Agassiz wrote the first survey of fossil fish.[3] A century later, Eric Stensiö showed that placoderms were genuine jawed fish.[4]

Remarkable fossils have more recently been found in the Gogo formation of northern Western Australia. This is a former Upper Devonian reef system, where well-preserved fossils of 25 species have been found.[2] The relationship between the placoderm and other jawed fish is still not clear. Most placoderms were benthic predators, near the bottom of the water column. The largest types, such as Dunkleosteus and Gorgonichthys were 6 metre-long top predators in the middle and upper pelagic zones.