Prince Andrew, Duke of York, (Andrew Albert Christian Edward, born 19 February 1960) is a member of the British Royal Family, the second son of Queen Elizabeth II and Prince Philip, Duke of Edinburgh. He has been titled Duke of York since 1986, and is eighth in line to the succession to the British throne.

Prince Andrew was born on 19 February 1960 at Buckingham Palace in London. He went to Heatherdown Preparatory School in Berkshire, England, and Gordonstoun in Scotland.

Andrew was the first child born to a reigning monarch since the birth in 1857 of Queen Victoria's youngest child, Princess Beatrice [2]. As with his older siblings, Andrew was looked after by a governess, who was responsible for his early education at Buckingham Palace [3]. He was sent to Heatherdown School near Ascot in Berkshire [4]. In September 1973, he entered Gordonstoun, in northern Scotland, which his father and elder brother had also attended [5]. While there, he spent six months—from January to June 1977—participating in an exchange programme to Lakefield College School in Canada [6]. He left Gordonstoun in July two years later with A-Levels in English, History, and Economics.

Andrew did not go to university, he went to Britannia Royal Naval College instead. In the Navy, he served in the Falklands War, and continued his career, becoming a commander in 1999 and an honorary captain in 2001.

In 1986, Andrew married Sarah Ferguson, the younger daughter of Ronald Ferguson, the polo manager for the Prince of Wales. They have two daughters from the marriage: Princess Beatrice and Princess Eugenie. Andrew and Sarah separated in 1992, and divorced in May 1996.

In November 2019, Andrew was interviewed for the BBC television programme Newsnight on 16 November 2019. The interviewer talked about the Prince's friendship with the convicted child sex offender Jeffrey Epstein before he died. The interview was very bad for the British royal family, because many people who saw the interview thought Prince Andrew was unsympathetic to Epstein's victims.[7][8] As of 20 November, he has no official royal duties.[9]

Prince Andrew's current full style is His Royal Highness The Prince Andrew Albert Christian Edward, Duke of York, Earl of Inverness, Baron Killyleagh, Knight Companion of the Most Noble Order of the Garter, Knight Grand Cross of the Royal Victorian Order, Personal Aide-de-Camp to The Queen.

He holds the following military appointments: 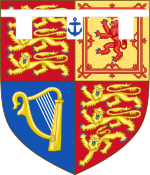 1st and 4th, Gules three Lions passant guardant in pale Or (England). (The first and fourth quarters display the three lions, representing England.)
2nd quarter is of a lion rampant within a Double Tressure floury counterflory Gules (Scotland). (The second quarter, displays a red lion in a yellow field with a double border coloured red, this represents Scotland.)
3rd, Azure a Harp Or stringed Argent (Ireland). (The third quarter shows a harp against a blue background, this represents Ireland.)

The whole differenced by a Label of three points Argent the central point charged with an Anchor Azure. The anchor is in reference to his naval career.

The arms are identical to those his grandfather George VI used when still Duke of York.