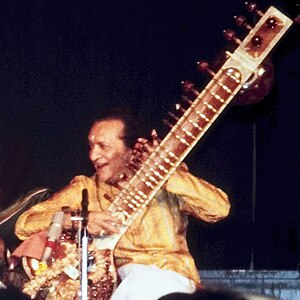 Ravi Shankar (7 April 1920 - 11 December 2012) was one of India's most famous musicians. Shankar was one of the first to bring aspects of traditional Indian music into Europe and American culture in the 1960s. He was a major influence on George Harrison, who was a member of The Beatles. Shankar is famous for playing the sitar, an Indian stringed instrument. He performed until his death. In 2005 he played at The Proms. His daughters Norah Jones and Anoushka Shankar are also well-known musicians.