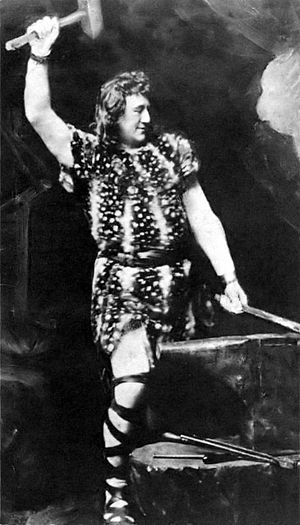 Der Ring des Nibelungen (The Ring of the Nibelung (Alberich)) is a cycle of four operas by Richard Wagner.

The story of each opera can be found in the separate articles.

Sometimes it is known as a “tetralogy” meaning: four works that belong together.

Wagner took the story of the operas from a book called the Nibelungenlied (the Nibelung Song) which was written in the 12th century by a German poet. We do not know the name of the poet. The story is about the ancient gods from German mythology.

Wagner made a lot of changes to the story in order to make it suitable for his four operas. Wagner’s story tells of a hoard of gold which is being guarded by the Rhinemaidens. The dwarf Alberich steals the gold and uses some of it to make a ring which makes the owner powerful over all the world. When Wotan, the chief god, steals it from him, Alberich puts a curse on the ring. The ring will bring death to whoever has it. The ring goes through the hands of several characters, all of whom die in the end.

Alberich belongs to a race of dwarfs called the “Nibelungs”. The word “Nibelungen” in the title of the cycle: Der Ring des Nibelungen (“The Ring of the Nibelung”), refers to Alberich (it is singular, not plural).

The story of Wagner’s Ring cycle sounds quite fantastic and strange, like a fairy tale. Although the characters seems very different from real people, the story tells us all about basic human emotions. It is a story about greed, love, lust, intrigue etc. This is what makes it so powerful.

Wagner’s music matches each character and situation beautifully. It develops continuously: there are no breaks in the music during the acts. Wagner used what he called leitmotifs (leading motives). These are tunes or chords or little musical phrases which are linked to particular people in the opera. In this way he can hint at things very cleverly in the music. For example: there is a leitmotiv for the curse. Whenever we hear this curse motive we know that the curse of the ring is working.

Wagner spent about twenty years writing the Ring cycle. He started in the 1850s when he was living in Switzerland. He wrote all the libretto (the words) himself, as he always did for his operas. By 1857 he had finished the first two operas and two thirds of Siegfried. It was many years later that he finally finished Siegfried and wrote the final opera as well.

Wagner wanted to have the Ring cycle performed in a special opera house which would be built in the way he wanted. He needed a lot of money for his ideas, and he was very lucky to find someone who adored his music and was happy to give him a lot of money. This was King Ludwig II of Bavaria (sometimes called the “mad king of Bavaria” because he did become insane). Wagner told the King that the Ring cycle would be performed in Munich which was the capital city of Bavaria. Later, when it seemed impossible to build a new opera house there, Wagner broke his promise and built his opera house in Bayreuth instead. The King did not seem to mind and still gave him lots of money for the project as well as a nice house to live in. Das Rheingold was first performed in Munich in 1869 and Die Walküre in 1870. The whole Ring cycle was first performed in 1876 in the new opera house called the Festspielhaus in Bayreuth.