Roerich Pact is a treaty on Protection of Artistic and Scientific Institutions and Historic Monuments, Apr. 15, 1935, 49 Stat. 3267, 167 L.N.T.S. 289 (hereinafter Roerich Pact) signed by the representatives of 21 states in the Oval Office of the White House (Washington, DC). As of January 1, 1990, the Roerich Pact had been ratified by ten nations: Brazil, Chile, Colombia, Cuba, Dominican Republic, El Salvador, Guatemala, Mexico, United States, Venezuela. Entry into force: 26 August 1935. The Government of India approved the Treaty in 1948 but no further formal action was taken. Roerich Pact is also known as Pax Cultura ("Cultural Peace" or "Peace through Culture"). The most important idea of the Roerich's Pact is the legal recognition that the protection of culture always has supremacy over any military necessity.

Russian painter and philosopher Nicholas Roerich (1874-1947) initiated the modern movement for the defense of cultural objects, for the idea of “Peace of Civilizations”.

Nicholas Roerich was born on October 9, 1874, in St. Petersburg. He became a successful painter. One of his paintings was purchased by Nicholas II of Russia.

After 1918 Roerich left Russia. In 1923, the Roerich Museum was founded in New York. Presently, the Roerich Museumis located in Manhattan, at the corner of 107th Street and Riverside Drive. Finally Roerich settled down in the Kulu Valley in the Himalayas. He died on December 13, 1947.

In 1929, Nicholas Roerich in collaboration with Paris University professor Giorge Chklaver prepared a draft of an international treaty dedicated to protection of cultural values (Roerich Pact). [1]

President Franklin D. Roosevelt made a decisive influence on the process of signing of this treaty by all states of American continent. Incidentally, Roosevelt kept in his private rooms a bust of Roerich.[2]

The Roerich Pact was laid in the basis for the United Nations Hague “International Convention for Protection of Cultural Values in the Event of Armed Conflict” signed in 1954. But all ideas of Roerich Pact still do not fully implemented in the international law, especially the preference of the presevation of cultural values to the military necessity.

1904: Nicholas Roerich proposed the idea of the protection of artistic and scientific achievements of humanity.

1914: Roerich proposed his idea to the then Russian Imperial Government during World War I.

1929: Roerich proposed to the nations to establish a pact for the preservation of the artistic and scientific world treasures.

1930: Pact was submitted to and approved by the Museums Committee of the League of Nations. Founded: “Committee of the Roerich Banner of Peace” (New York) and “Comité pour le Pact Roerich” (Paris).

1948: The Government of India approved the Roerich Pact.

The UN ”International Convention for Protection of Cultural Values in the Event of Armed Conflict" was adopted in The Hague on May 14, 1954. The Roerich Pact was used as a foundation for this Convention. The Hague Convention became effective on August 7, 1956. 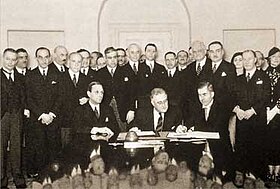 Signing of the Roerich’s Pact (in centre: Franklin Delano Roosevelt)

The High Contracting Parties, animated by the purpose of giving conventional form to the postulates of the Resolution approved on December 16, 1933, by all the States represented at the Seventh International Conference of American States, held at Montevideo, which recommended to “the Governments of America which have not yet done so that they sign the ‘Roerich Pact’, initiated by the Roerich Museum in the United States, and which has as its object, the universal adoption of a flag, already designed and generally known, in order thereby to preserve in any time of danger all nationally and privately owned immovable monuments, which form the cultural treasure of peoples”, have resolved to conclude a treaty with that end in view, and to the effect that the treasures of culture be respected and protected in time of war and in peace, have agreed upon the following articles:

ARTICLE II The neutrality of, and protection and respect due to, the monuments and institutions mentioned in the preceding article, shall be recognized in the entire expanse of territories subject to the sovereignty of each of the signatory and acceding States, without any discrimination as to the State allegiance of said monuments and institutions. The respective Government agrees to adopt the measures of internal legislation necessary to insure said protection and respect.

ARTICLE III In order to identify the monuments and institutions mentioned in Article I, use may be made of a distinctive flag (red circle with a triple red sphere in the circle on a white background) in accordance with the model attached to this treaty.

ARTICLE IV The signatory Governments and those who accede to this treaty, shall send to the Pan-American Union, at the time of signature or accession, or at any time thereaft er, a list of the monuments and institutions for which they desire the protection agreed to in this treaty. The Pan-American Union, when notifying the Governments of signatures or accessions, shall also send the list of monuments and institutions mentioned in this article, and shall inform the other Governments of any changes in said list.

ARTICLE V The monuments and institutions mentioned in Article I shall cease to enjoy the privileges recognized in the present treaty in case they are made use of for military purposes.

ARTICLE VI The States, which do not sign the present treaty on the date it is opened for signature, may sign or adhere to it at any time.

ARTICLE VII The instruments of accession, as well as those of ratifi cation and denunciation of the present treaty, shall be deposited with the Pan-American Union, which shall communicate notice of the act of deposit to the other signatory or acceding States.

IN WITNESS WHEREOF, the undersigned Plenipotentiaries, after having deposited their full powers found to be in due and proper form, sign this treaty on behalf of their respective governments, and affi x thereto their seals, on the dates appearing opposite their signatures.

The Roerich Pact proposed a flag for identification of protected objects – the Banner of Peace which was a white cloth containing a red ring and three red circles inscribed in it. The sign symbolized a unity of the past, present and future into the ring of eternity. Ideas of the Pact were reflected in Roerich’s art. Banner of Peace symbol is one we can see in many paintings of Nicholas Roerich.

The Roerich Pact is not only the international treaty. It is a conglomerate of legal ideas about a new state. The state budget should annually spent on culture, art and education. This expenses must be larger than military expenses. This is the legal recognition that the protection of cultural objects is more important than any military necessity. Roerich, considered the care for future generations to be a cornerstone of the existence of the constitutional state.[3]

President of the USA, Franklin D. Roosevelt, in the speech upon the signature of the ‘Roerich Pact’ Treaty said: “In opening this Pact to the adherence of the Nations of the world, we are endeavoring to make of universal application one of the principles vital to the preservation of modern civilization. This Treaty possesses a spiritual significance far deeper than the text of the instrument itself."[4] The Roerich Pact was the important step towards the future development of a new legal culture. The provisions of Roerich’s concept are based on the idea that the primary duty of the state is to preserve the national culture. Ideas of Roerich Pact still do not fully implemented in the international law .” [5] 21st century is a good time to implement these ideas.[6]