WWE SmackDown is a professional wrestling television program for WWE. Currently it is the only television broadcast for the SmackDown! brand. From its launch in 1999, SmackDown! was shown on Thursday nights, but as of September 9 2005, the show moved to Friday nights. To reflect this change, the show is now known to as Friday Night SmackDown!. The SmackDown! brand is currently one of WWE's two brands, the other being Raw.

Its currently shown in the United States on MyNetworkTV, in Canada on The Score Network and on E! Montreal, in Turkey on Fox TV, in Bangladesh, India and Pakistan on Ten Sports, in Germany on DSF, in the UK and Republic of Ireland on Sky Sports 3, Italy on Sky Italia, in Finland on Urheilukanava, in Portugal on TVI, in the Dominican Republic on Antena Latina Channel 7, in Puerto Rico on WAPA and on The CW, in Ecuador on Teleamazonas, in Chile on Chilevisión, in Malaysia on TV3, in Mexico on 52MX, in Australia on FOX8,[2] in New Zealand on The BOX,in Bulgaria on GTV, in the Philippines on Jack TV and ABC, in Peru on ATV, in Spain on Cuatro, in Romania on TV Sport, in Serbia on FOX Televizija, in Saudi Arabia and Middle East on Showtime Arabia and ShowSports 4, in France on RTL9, in Japan on J Sports, on e.tv in South Africa, on AFN Xtra, on the Super Channel (Channel 10) in Fiji Islands, on VTV in El Salvador, on Canal 9 in Argentina, on Canal 4 RP in Panama and on SBT in Brazil.

SmackDown! was first seen on April 29, 1999 as a single television special on UPN. On August 26, 1999, SmackDown! officially started on UPN, in Kansas City, Missouri. Like WCW Thunder, SmackDown! was recorded on Tuesdays and then broadcast on Thursdays. The new WWF show was so popular that WCW moved Thunder to Wednesdays in the hope of holding on to fans rather than losing them to WWF. SmackDown!, like Thunder, made heavy use of the color blue, earning it the nickname "The Blue Show" amongst wrestling fans.

The first SmackDown! set was different as it had an oval-shaped TitanTron (which was dubbed the "OvalTron"), entrance and stage which made it stand out from the RAW set and its rectangular TitanTrons. An added feature to the first set was the ability for the OvalTron to be moved to either the left or right of the stage. Throughout the show's early existence, top WWF superstar The Rock routinely called SmackDown! "his" show, in reference to the fact that the name was derived from one of his catchphrases, "Laying the smackdown." In August 2001, as part of celebrating SmackDown!'s second anniversary, the show got a new logo and set. The last SmackDown! to use the previous television set saw Alliance member Rhyno Gore WWF member Chris Jericho through the center screen, destroying part of the set.

In early to mid-2002, WWE had a process they called the "Brand Extension". WWE divided itself into two "de facto" wrestling promotions with separate rosters, storylines and authority figures. RAW and SmackDown! would host each division, give its name to the division and essentially compete against each other. The split was a result of WWF purchasing their two biggest competitors, WCW and ECW. The brand extension was publicly announced during a telecast of WWF RAW on March 25, 2002, and became official the next day.

Wrestlers now would become show-exclusive, wrestling for their specific show only. At the time this excluded the WWE Undisputed Championship and WWE Women's Championship, as those WWE titles would be defended on both shows. In August 2002, WWE Undisputed Champion Brock Lesnar refused to defend the title on RAW, in effect causing his title to become exclusive to SmackDown! The following week on RAW, General Manager Eric Bischoff awarded a newly instated World Heavyweight Championship to RAW's designated #1 contender, Triple H. Due to the fact that since the WWE Undisputed Championship was now SmackDown! exclusive it was no longer seen as "Undisputed". Following this, the WWE Women's Championship soon became RAW-exclusive as well. As a result of the Brand Extension, an annual "draft lottery" was instituted to exchange members of each roster and generally refresh the lineups.

On June 6, 2005, WWE Champion John Cena switched brands from SmackDown! to RAW as part of the month-long Draft Lottery. This effectively left SmackDown! without a World Title. During this time, United States Champion Orlando Jordan was billed as the top champion on the show. On June 23, 2005, in Tucson, SmackDown! General Manager Theodore Long announced a six-man elimination match between John "Bradshaw" Layfield, Booker T, Chris Benoit, The Undertaker, Christian (replacing The Big Show, who was picked by RAW in the lottery), and Muhammad Hassan to crown the first SmackDown! Champion. On the June 30 episode of SmackDown!, JBL won the match. Long appeared afterward and stated that even though JBL had won the match, SmackDown! did not need a Championship anymore. Batista, the World Heavyweight Champion, entered the ring as SmackDown!'s final draft lottery pick. Long also showed that JBL was the number one contender for the World Heavyweight Championship.

It was possible that WWE's "lame duck" status with Viacom on Spike TV is what prompted its moving SmackDown! to the Friday night death slot for the Fall 2005 season. However, it worked out for both parties involved, as the show did better in the ratings than it had on Thursdays, while UPN got much better ratings on Fridays than it did before, with its movie night. Also, UPN had been able to hold on to the ratings from Thursday nights, most notably with comedian Chris Rock's Wonder Years-like sitcom Everybody Hates Chris. In January 2006, prior to the announcement of the CW Network, it was announced that UPN had renewed SmackDown! for two more years.[3]

Following the cancellation of Star Trek: Enterprise, SmackDown! was renamed Friday Night SmackDown! and moved into Enterprise's old timeslot in the United States. WWE promoted this move with the tagline "TV that's changing Friday nights." Friday Night SmackDown! made its start on September 9 2005. The program still aired on Thursdays in Canada on the Score. In the United Kingdom and Australia, their stations Sky Sports and FOX8 air SmackDown! on Fridays before the United States due to the time difference. This is the first time a major weekly WWE show airs internationally before it hits screens in the U.S.

The events of Hurricane Katrina affected the first version of Friday Night SmackDown! in the U.S. due to a special fundraising concert (see Shelter From the Storm: A Concert for the Gulf Coast) that was shown on UPN at the same time that the first version would have been shown, resulting in only the second hour of the show being shown on UPN. The first hour was instead streamed from WWE's website. Other countries, including Canada, United Kingdom, Australia and the Philippines received the full two-hour show. WWOR-TV (My 9, New York, New York) also aired both hours of the show on tape delay on Saturday, due to a previous commitment to broadcast the New York Yankees on Friday nights.

At the SmackDown! taping on January 10 2006, Batista had to forfeit the World Heavyweight Championship because of a triceps injury. Theodore Long made a Battle Royal for the vacant title. The winner was at the time RAW superstar Kurt Angle, who later switched to the SmackDown! brand. In a break from their traditional role of acting as if SmackDown! is not pre-recorded, WWE.com had a photograph of Angle holding his new title on the main page. WWE also did this when Edge cashed in his Money in the Bank contract to win the World Heavyweight Championship from The Undertaker and when The Great Khali won a battle royal after Edge's injury.

On the April 7 2006 version of SmackDown!, general manager Theodore Long said that the King of the Ring tournament would return after a four year hiatus as a SmackDown!-exclusive tournament. The tournament ended at Judgment Day 2006 with Booker T as the winner, defeating Bobby Lashley in the final.

On June 9 2006, Tazz left the SmackDown! brand to join the new ECW brand, leaving the color commentator position on SmackDown! vacant. However, on June 11 at One Night Stand 2006, JBL revealed that he would be the new color commentator for SmackDown! He stayed in that position until December 2007 when he left SmackDown! to become an in-ring competitor on RAW. Jonathan Coachman replaced him afterwards. 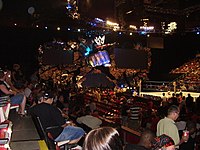 On September 22 2006, Friday Night SmackDown! was started on The CW Television Network, a joint venture between CBS Corporation, owner of UPN, and Warner Bros. Entertainment, a subsidiary of Time Warner, majority owner of The WB.

For four weeks before the official start (and in preparation for the impending removal of UPN in several markets by the start of MyNetworkTV on September 5 2006) of Friday Night SmackDown! on the CW on September 22 2006, Tribune Broadcasting television stations in six major markets (including WPIX in New York City and KTLA in Los Angeles) aired WWE's Friday Night SmackDown! early in September 2006.[4] Two other future affiliates of The CW, WCWJ in Jacksonville, Florida and WIWB in Green Bay, Wisconsin, also aired SmackDown! in early September as well.

The transition to the CW caused an interruption in the broadcast of SmackDown! in the state of Utah beginning in June when KPNZ in Salt Lake City stopped airing all UPN programs early. The show is now seen on KUCW. In Hawaii, SmackDown! returned in late 2006, airing on a CW digital subchannel of Honolulu's FOX affiliate KHON (Channel 2), which has received statewide carriage over Oceanic Time Warner Cable. Since the move to the CW Network, Friday Night SmackDown! has shown a major increase in ratings now averaging a 3.0 national rating. In addition, SmackDown! has become the second highest watched program on The CW.

On October 16 2007 it was said that the SmackDown! and ECW brands would begin a "talent exchange", allowing their respective talent to appear and compete on either brand.[7][8]

On July 10 2007,[13] Merriam-Webster announced it would induct the word smackdown[14] into Webster's Dictionary. According to Merriam Webster, a smackdown is:

SmackDown is usually taped on Tuesday evening and shown Friday evening on MyNetworkTV the same week. Lately though, they have taped two episodes at a time and as a result are taped every two weeks. Sometimes, it is taped on Monday nights before or after RAW in what is called a "Supershow". SmackDown has also been shown live sometimes.

On October 26, 2012, WWE SmackDown began using "Born 2 Run" by 7Lions as its theme song. before this, SmackDown used "Know Your Enemy" by Green Day. "Hangman" by Rev Theory was used as the secondary theme song.[15] The previous theme song, "Let it Roll" by Divide the Day[16] was replaced when SmackDown began being broadcast on Syfy.

Friday Night SmackDown! began broadcasting in HD beginning with the January 25 2008 edition of SmackDown!, where a new set started that is shared among all three WWE brands.[17]

Seasonal rankings (based on average total estimated viewers per episode) of SmackDown! on UPN and The CW