WrestleMania 21 was the twenty-first yearly WrestleMania professional wrestling pay-per-view event produced by World Wrestling Entertainment (WWE). It took place on April 3, 2005 at the Staples Center in Los Angeles, California.[2] The official theme song for the event was "Big Time" by The Soundtrack of Our Lives.[3] The secondary theme song was "Behind Those Eyes" by 3 Doors Down.[3] The tagline for WrestleMania 21 was "WrestleMania Goes Hollywood."

The event was a joint-promotion pay-per-view, featuring performers from the Raw and SmackDown! brands. The main match on the Raw brand was Triple H versus Batista for the World Heavyweight Championship, which Batista won by pinfall after executing a Batista Bomb.[2][4] The main match on the SmackDown! brand was John "Bradshaw" Layfield versus John Cena for the WWE Championship, which Cena won after performing an FU.[2][4] The featured matches on the undercard included The Undertaker versus Randy Orton, Kurt Angle versus Shawn Michaels, and the first ever Money in the Bank ladder match, which featured six participants from the Raw brand.[2]

The main feud heading into WrestleMania on the Raw brand was between Triple H and Batista for the World Heavyweight Championship. Batista won the 2005 Royal Rumble, last eliminating John Cena, earning the right to participate in the main event of WrestleMania 21 against the World Champion of his choice.[5] In an attempt to persuade Batista to challenge WWE Champion John "Bradshaw" Layfield rather than Batista facing Triple H at WrestleMania, Triple H concocted a scheme to have Batista run over in a limousine resembling the one used by Layfield.[6] Initially, Batista did not want help from Evolution and wanted to confront JBL by himself. Triple H insisted that Evolution accompanied Batista anyway, saving him from the oncoming limousine.[7] Batista became aware of the plot while eavesdropping on fellow Evolution members and signed a contract guaranteeing him a match with World Champion Triple H at WrestleMania, thus leaving Evolution and officially turning face.[7] Batista pretended to sign with the SmackDown! brand, giving Triple H and Flair the "thumbs up," but turned it into a "thumbs down" before attacking the pair. This lead to Batista's departure from the stable.[7]

The main feud heading into WrestleMania on the SmackDown! brand was between John "Bradshaw" Layfield and John Cena for the WWE Championship. At No Way Out, Cena defeated Kurt Angle to earn a spot in the SmackDown! main event.[8] As a result of Cena's win, he began a feud with WWE Champion John "Bradshaw" Layfield (JBL) and his Cabinet. In the feud, Cena lost his United States Championship to Cabinet member Orlando Jordan.[9] The following week, JBL proceeded to "blow up" Cena's U.S. spinner version belt and reintroduce the traditional style belt.[10]

A heavily promoted match for the event was an Interpromotional match between SmackDown! superstar Kurt Angle and Raw superstar Shawn Michaels. Their match stemmed from the Royal Rumble, the pay-per-view event two months before WrestleMania. At the Royal Rumble, Kurt Angle relentlessly attacked Shawn Michaels after Michaels had eliminated him from the Royal Rumble match.[5][11] The next month at No Way Out, Angle lost a number one contenders match to John Cena, losing a spot in the SmackDown! main event at WrestleMania.[12][13] The next night on Raw, Michaels told SmackDown! General Manager Theodore Long to inform Angle that he had challenged him to a match at WrestleMania.[14][15] On the February 28 edition of Raw, after Michaels defeated Edge in a Street Fight, Angle attacked Michaels and accepted his challenge.[16][17] 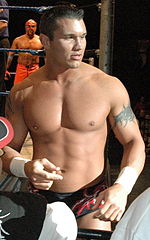 Randy Orton, who faced off against The Undertaker.

The other Interpromotional match on the card was between Randy Orton and The Undertaker, with Orton representing Raw and Undertaker representing SmackDown!.[2] The feud first started on the March 7 edition of Raw when Orton challenged The Undertaker to a match at WrestleMania billed as "Legend vs. Legend Killer".[18][19] Three days later on SmackDown!, Undertaker accepted Orton's challenge.[20][21] On the March 14 edition of Raw, Jake "The Snake" Roberts, attempted to give Orton advice about his match with Undertaker at WrestleMania, but was RKOed when Orton was not cooperating.[22][23] Later that week on SmackDown!, Orton and Undertaker had a contract signing for their match at WrestleMania.[24][25] After both men signed, Orton told Undertaker that he has nothing but respect for him. Shortly afterwards, Orton slapped him and claimed that his 12-0 undefeated streak at WrestleMania, would soon be 12-1.[24][25] The next week on Raw, Orton claimed that his confidence was at an all-time high, despite what happened on SmackDown! the week before. Afterwards, Orton turned heel and furthered his Legend killer gimmick by RKOing his then-girlfriend Stacy Keibler.[26][27]

Another match on the card was the Money in the Bank ladder match between Chris Jericho, Christian, Chris Benoit, Edge, Kane, and Shelton Benjamin. The idea for the Money in the Bank match was introduced by Chris Jericho who proposed a six-man Ladder match,[17] for the event in which the winner would receive a contract for a World title match at the place and time of his choosing. Raw General Manager, Eric Bischoff, booked the match at WrestleMania 21 soon after.[19][28]

Lilian Garcia sang "America the Beautiful" at the start of the event.[29] The first televised match of the night was between Rey Mysterio and Eddie Guerrero. In the beginning of the match, Mysterio jumped over the top rope, knocking Guerrero down. Mysterio also attempted another aerial attack but was countered by Guerrero into a Powerbomb. Guerrero placed Mysterio into the Three Amigos and attempted a Frog splash but was unsuccessful. Following a Hurricanrana by Mysterio on Guerrero, Mysterio pinned Guerrero to win. After the match, both shook hands in the ring.[1][29]

John "Bradshaw" Layfield and Orlando Jordan were then shown backstage talking about Layfield's match against John Cena. As Triple H and Ric Flair walked by, Triple H mocked Layfield. Layfield retaliated by advising Triple H to worry about losing the World Heavyweight Championship to Batista and assured him that John Cena would be unsuccessful at defeating him for the WWE Championship. Triple H then stated that only the end of the night would reveal who would still be champion.[1][29]

The match that followed was the first Money in the Bank ladder match which featured Chris Jericho, Chris Benoit, Shelton Benjamin, Edge, Kane, and Christian with Tyson Tomko at ringside. The match contained many notable moments, including points where Jericho, Christian, Benjamin and Kane all jumped over the top rope to the outside of the ring to knock down multiple opponents. Another moment included Benjamin executing a T-Bone Suplex on Edge off the top of a ladder and later using an inclined ladder as a ramp to run up a standing and hit Jericho with a Clothesline maneuver. Benoit also executed a Diving headbutt from the top of a ladder onto Kane. In the conclusion to the match, Benoit climbed a ladder to attempt to retrieve the Money in the Bank briefcase hanging above the ring but was stopped by Kane who had also climbed the ladder. Benoit used repeated headbutts to knock Kane to the ground and attempted to retrieve the briefcase once more but was knocked down by Edge who hit him with a steel chair. Edge then climbed the ladder and successfully obtained possession of the briefcase to win the match.[1][29]

In an interlude, Eugene entered the ring and shared his excitement about being at his first WrestleMania with the crowd in attendance. While attempting to recall his favorite WrestleMania moments, Muhammad Hassan and Daivari interrupted him with Hassan expressing his outrage for not being included in a match for the event. Hassan concluded that since he was not scheduled to compete at the event and was therefore denied the opportunity to experience his own WrestleMania "moment", he would have to create a "moment" of his own. Following this remark, Hassan and Daivary began to assault Eugene. With Eugene placed into a Camel clutch hold while Daivari verbally attacked him, Hulk Hogan came down to the ring to save Eugene from the assault, knocking Hassan and Daivary out of the ring. Hogan celebrated posing in the ring for the crowd.[1][29]

The third match featured The Undertaker and Randy Orton. Bob Orton, Randy's father and ringside manager, interfered and attacked Undertaker with his arm cast resulting in Randy Orton gaining control of the match. Undertaker attempted to chokeslam Orton, but Orton countered the maneuver with an RKO that led to a two-count. Orton then attempted to use Undertaker's own finishing maneuver against him with the Tombstone piledriver, however, it was reversed by Undertaker into Tombstone piledriver of his own which led to the definitive pin fall. The Undertaker won the match and continued his undefeated streak at WrestleMania with a 13-0 record.[1][29]

The next match was for the WWE Women's Championship, between Trish Stratus and Christy Hemme with Lita at ringside. Stratus controlled most of the match though Hemme attempted many pinning maneuvers that were unsuccessful. Hemme then executed a Twist of fate on Stratus and attempted another pin, which was also unsuccessful. After a Roll-up attempt by both Stratus and Hemme, Stratus hit Hemme with a Chick kick and followed it with the decisive pin, thus winning the match and retaining the WWE Women's Championship.[1][29]

The fifth match was the encounter of Shawn Michaels and Kurt Angle. Mid-way in the match, Michaels hit Angle with low blow, after he countered a suplex attack from Angle. Following the low blow, which was not seen by the referee, Michaels leapfrogged from the ring and laid out Angle onto the announce table. Angle would then gain control of the match, as he would apply the Ankle Lock on Michaels, forcing him to submit, thus Angle winning the match.[1][29]

The next match was between Akebono and The Big Show in a Sumo Match. The match went for a minute and Akebono won the match after he threw The Big Show out of the ring, thus winning the Sumo Match.[1][29]

Batista and Triple H's feud would continue. It would continue to Backlash where Batista and Triple H had a rematch for the World Heavyweight Title. Batista won the match after a Batista Bomb out of a corner. Following that, the two concluded their rivalry at Vengeance where Batista scored the third and final win over his former mentor inside Hell in a Cell. Shortly thereafter, Batista was drafted to the SmackDown brand, and Triple H opted to take time off.

In line with the event's location and tagline, WrestleMania 21 was promoted on television with a series of parody movie trailers with wrestlers playing the starring roles from famous modern movies.

Numbers in parentheses indicate the length of the match.