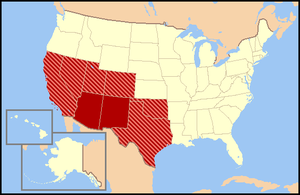 Regional definitions vary from source to source. The states shown in dark red are usually included, while all or portions of the striped states may or may not be considered part of the Southwestern United States.

The Southwestern United States (called the American Southwest or simply the Southwest) is a region of the western United States. The region is warmer than the northern states and drier than the eastern states. The area includes Arizona and New Mexico, sometimes called the "Desert Southwest." Often counted as part of the Southwest are Southern California, parts of Nevada, Utah, and Colorado and western Texas. The Southwest has seen large amounts of growth in recent years, both the Phoenix, Arizona and Las Vegas, Nevada areas are amongst the fastest growing in the country.