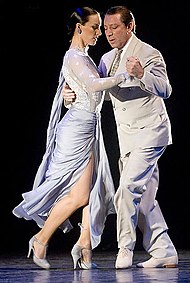 A couple dances Argentine tango. Notice the space between the partners in this style 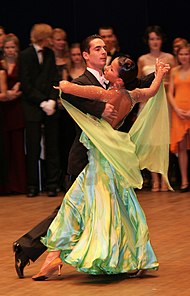 This is a ballroom tango. The style of ballroom dancing is "One big idea: two people dancing as one" 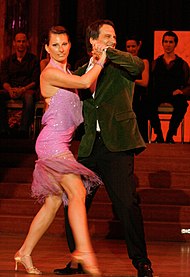 A social tango at a charity event

The Tango is a dance which was created in Buenos Aires, Argentina. The musical style that was created with the dance is also called 'tango'. It is danced today in two versions. Neither version is 'better' than the other; they are rather different in style.

The first tango dances and music was called tango criollo, or simply tango. Today, there are various tango dance styles, including Argentine tango, Uruguayan tango and vintage tangos. The Argentine tango is probably closer to that originally danced in Argentina and Uruguay, though no details survive of its original form.

The tango is a standard dance in international ballroom dancing. This version was developed in England before WWII, mainly as a result of the work of Monsieur Pierre, a French dance teacher who lived in London.

The Tango is now danced in international competitions to a style first set out in English ballroom texts and regulations.[1][2]

Thomson is Professor of Art at Yale University. He started his career with an article on Afro-Cuban dance and music published in 1958, and has devoted his life to the art history of the Afro-Atlantic world. 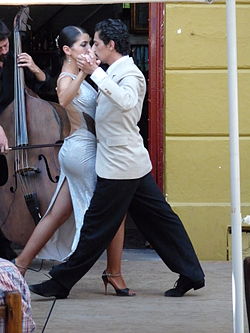