Teotihuacán[1] [teotiwa'kan] was a city in pre-Columbian America. At the time it was most populated, it was the largest known city there. This was from about the 1st century to about the 5th century.

The civilization and culture lived around this city is also called Teotihuacán. Its important position can be seen in various sites in Veracruz, and the area controlled by the Maya civilization.

The city is about 40km away from Mexico City in the State of Mexico. It is about 83 km² in surface. It was made a UNESCO World Heritage Site in 1987.

...and the opposing view, from the Pyramid of the Sun.

The name Teotihuacán was given by the Nahuatl-speaking Aztec centuries after the fall of the city. Although the original name of the city is unknown, it can be seen in hieroglyph inscriptions. Nahuatl creation myths took place in the city. The Nauhatl name,Teotihuacán, therefore translates to 'birthplace of the gods. '

The Maya seemed to have referred to it as puh, as place of reeds. This is similar to other Central Mexican settlements that took the name 'Tollan' such as Tula-Hidalgo and Cholula. It looks like Tollan was a general term, used for large settlements. In the concept of urbanism of the time, Tollan and other names seemed like a metaphor. They linked the bundles of reeds and rushes that formed part of the environment of the Valley of Mexico and the large gathering of people in a city.[2] 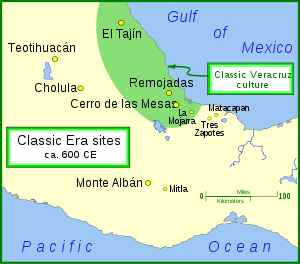 A Platform along the Avenue of the Dead demonstrating the talud-tablero architectural style.

Other people believe the Totonac were the founders of Teotihuacán. The debate continues to this day. At least some of the people living in Teotihuacán seemed to have come from areas influenced by the Teotihuacano civilization. This includes the Zapotec, Mixtec and Maya peoples. The culture and architecture of Teotihuacán was also influenced by the Olmec people. They are considered to be the "mother civilization" of Mesoamerica. The earliest buildings at Teotihuacán date to about 200 BCE, and the largest pyramid, the Pyramid of the Sun, was completed by 100 CE.

The city reached its zenith between 150 and 450. It was the center of a powerful culture whose influence extended through much of the Mesoamerican region. At its height the city covered over 30 km² (over 11½ square miles). It probably housed a population of over 150,000 people, possibly as many as 250,000.[3] Various districts in the city housed people from across the Teotihuacano region of influence that spread south as far as Guatemala. There seem to be no fortifications or military structures in the city.

Different researchers have discussed what the relations the city had with the other cultural centers of the region might have been like. The most notable other civilzation in the region were the Mayas. Researchers agree that there was a large cultural exchange between Teothihuacan and its neighbors. Teotihuacan-inspired ideologies" and motifs persisted at Maya centres into the Late Classic long after Teotihuacan itself had declined.[4] The ideas of exchange range from a military domination of Teotihuacan over its neighbors to a policy of adopting 'foreign' traits, if they were useful.

Architectural styles from Teotihuacán can also be found in Mesoamerican sites far away. Some researchers see this as evidence for Teotihuacan's far-reaching interactions and political or militaristic dominance.[5] A style that has been particularly associated with Teotihuacan is known as talud-tablero. In this style, an inwards-sloping external side of a structure (talud) is below a rectangular panel (tablero). Variants of the generic style can be found in some Maya region sites. These sites include Tikal, Kaminaljuyu, Copan, Becan and Oxkintok. They can be found particularly in the Petén Basin and the central Guatemalan highlands.[6] The Talud-Tablero style is probably older than Teotihuacán. It seems to have come from the Tlaxcala-Puebla region, originally.[7] The style seemed to have appeared at Tikal before the 5th century, where Teotihuacán-related motifs also appear. The style seems to have spread through the region form the end of the Preclasic period, unrelated to the influence of Teotihuacán. It is currently unclear where the style originally came from, and how it arrived in the Maya region.[8]

The city was a center of industry. Many potters, jewelers and craftsmen lived there. Many obsidian artifacts were produced in Teotihuacán. Unfortunately no ancient Teotihuacano non-ideographic texts are known to exist (or known to have existed). Mentions of the city in inscriptions from Maya cities show that Teotihuacán nobility travelled to local rulers, as far away as Honduras. It might have conquered them. Maya inscriptions mention an individual nicknamed by scholars as "Spearthrower Owl". He seems to have been a ruler of Teotihuacán, who reigned for over 60 years. He installed his relatives as rulers of Tikal and Uaxactún in Guatemala. Most of what we infer about the culture at Teotihuacán comes from the murals on the site and others, like the Wagner Murals, found in private collections, and from hieroglyphic inscriptions made by the Maya describing their encounters with Teotihuacano conquerors.

At first, people believed that sometime in the 7th or 8th century, the city was sacked and burned by invaders. The Toltecs might have invaded the city. More recent research shows, that the fire damage and looting seems to be limited to the structures and houses of the elite. This evidence makes an uprising more likely than invasion. The invasion theory is also flawed, because excavation and restoration work started with the temples, and palaces. All these structures showed fire damage. The archaeologists then concluded, that probably the whole city was burned.

The destruction seems to have been focused on structures along the Avenue of the Dead. Some statues seem to have been destroyed in a rather methodical way. The population in the city started to decline around the 6th century. This supports the hypothesis that there was unrest in the city. The decline in population is generally linked to droughts. These were linked to climate change, occurring in 535-536. There also seem to be more skeletons of young people, and more evidence of malnutrition in city in the 6th century.

There is no conflict between the theories. Both increased warfare and internal unrest can also be effects of a general period of drought and famine.[9]

Other cities nearby tried to take the position of Teotihuacán. These include Cholula, Xochicalco, and Cacaxtla. They tried to fill the power vacuum left by Teotihuacán's decline. They may have aligned themselves against Teotihuacán to reduce its influence and power. The art and architecture at these sites show an interest in emulating Teotihuacán forms. There is also but also a broader mix of motifs and iconography from other parts of Mesoamerica, particularly the Maya region. 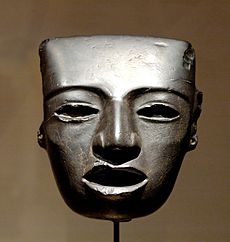 Teotihuacán was a multi-ethnic city, with distinct Zapotec, Mixtec, Maya and what seem to be Nahua quarters. The Totonacs have always maintained that they were the ones who built it, a story that was later supported by the Aztecs.

The religion of Teotihuacán is similar to those of other Mesoamerican cultures. Many of the same gods were worshipped. This includes the Feathered Serpent and The Rain god. Teotihuacán was a major religious center. The priests probably had a great deal of political power. As with other Mesoamerican cultures, Teotihuacános practiced human sacrifice. Human bodies and animal sacrifices have been found during excavations of the pyramids at Teotihuacán. When the buildings were expanded, sacrifices were probably made to dedicate the new building. The victims could have been enemy warriors captured in battle. They were then brought to the city to be ritually sacrificed so the city could prosper. Some were decapitated, others had their hearts removed, still others were killed by being hit several times over the head. Some were even buried alive. Animals that were considered sacred and represented mythical powers and military might were also buried alive. They were imprisoned in cages, though. Cougars, a wolf, eagles, a falcon, an owl, and even venomous snakes were among those found.

The city's broad central avenue, called "Avenue of the Dead" (a translation from its Nahuatl name Miccaotli), is flanked by impressive ceremonial architecture, including the immense Pyramid of the Sun (second largest in the New World after the Great Pyramid of Cholula) and the Pyramid of the Moon. Along the Avenue of the Dead are many smaller talud-tablero platforms. The Aztecs believed they were tombs, inspiring the name of the avenue. Now they are known to be ceremonial platforms that were topped with temples. Further down the Avenue of the Dead is the area known as the Citadel, containing the ruined Temple of the Feathered Serpent. This area was a large plaza surrounded by temples that formed the religious and political center of the city. The name "Citadel" was given to it by the Spanish, who believed it was a fort. Many of the rich and powerful Teotihuacanos lived in Palaces near the temples, the largest of these covering more than 3300 m².[11] Most of the common people lived in large apartment buildings spread across the city. Many of the buildings contained workshops that produced pottery and other goods.

The geographical layout of Teotihuacán is a good example of the Mesoamerican tradition of planning cities, settlements and buildings as a representation of the Teotihuacano view of the Universe. Its urban grid is aligned to precisely 15.5º east of North. The Street of the Dead, in particular, seems to line up with Cerro Gordo to the north of the Pyramid of the Moon. Pecked-cross circles throughout the city and in the surrounding regions indicate how the grid was managed over long distances.

Pyramid of the Sun

Knowledge of the great ruins of Teotihuacán was never lost. After the fall of the city, various squatters lived on the site. During Aztec times, the city was a place of pilgrimage and identified with the myth of Tollan, the place where the sun was created. Teotihuacán astonished the Spanish conquistadores during the post-conquest era. Today Teotihuacán is one of the most noted archaeological attractions in Mexico.