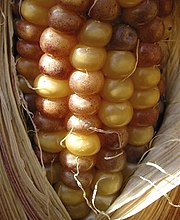 Spots in the maize are mutations caused by transposons

A transposon is a sequence of DNA that can move to new positions within the genome of a single cell. The press called them jumping genes, but it is not correct to call them 'genes'.

Transposons were first found by Barbara McClintock while working on maize. She received a Nobel Prize for her work in 1983. 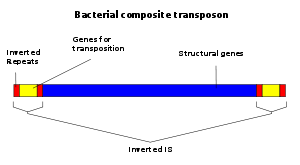 Class I (Retrotransposons): They copy themselves in two stages, first from DNA to RNA by transcription, then from RNA back to DNA by reverse transcription. The DNA copy is then inserted into the genome in a new position. Retrotransposons behave very similarly to retroviruses, such as HIV.

Class II (DNA transposons): By contrast, the cut-and-paste transposition mechanisms of class II transposons do not involve an RNA intermediate.[2]:284

As causes of disease

Transposons are mutagens. They can damage the genome of their host cell in different ways:

Transposons can carry accessory genes, such as antibiotic resistance genes. They can be used to put a gene into the DNA of an organism. This has been done with fruit flies (Drosophila melanogaster) by putting the transposon into the embryo.

Transposons are found in many forms of life. They may have arisen independently many times, or perhaps just once and then spread to other kingdoms by horizontal gene transfer.[11]

While some transposons may confer benefits on their hosts, most are regarded as selfish DNA parasites. In this way, they are similar to viruses. Various viruses and transposons also share features in their genome structures and biochemical abilities, leading to speculation that they share a common ancestor.

In vertebrate animal cells nearly all the 100,000+ DNA transposons in a genome code for inactive polypeptides.[12] In humans, all of the Class I-like transposons are inactive. The first DNA transposon used as a tool for genetic purposes, the Sleeping Beauty transposon system, was a transposon which was resurrected from a long evolutionary sleep.[13][14]

Role in the immune system

Transposons may have been co-opted by the vertebrate immune system as a means of producing antibody diversity: The V(D)J recombination system operates by a mechanism similar to that of transposons. This is a system of three genes which get rearranged in the production of vertebrate lymphocytes. The system diversely encode proteins to match antigens from bacteria, viruses, parasites, dysfunctional cells such as tumor cells,[15] and pollens.

The final DNA sequence, and thus the sequence of the antibody, is highly variable, even when the same two V, D, or J segments are joined. This great diversity allows VDJ recombination to generate antibodies even to microbes that neither the organism nor its ancestors have ever previously encountered.