listen); French: L'union fait la force; German: Einigkeit macht stark) is the national motto of Belgium. It was also taken on by Bulgaria and Haiti. 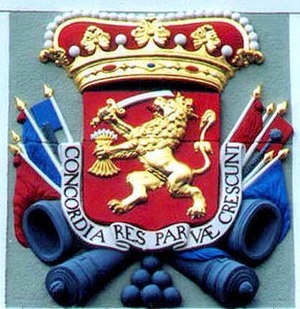 Former coat of arms of the Netherlands

The motto was first used in 1550. It came from the Latin phrase "concordia res parvae crescunt" (small states flourish by concord). The new Dutch Republic took over the phrase as its motto. It was on several of its coins and coats of arms.

The French were in the Netherlands from 1795 to 1813, first as the Batavian Republic then the Kingdom of Holland. Early on the national motto was changed to "Gelykheid, Vryheid, Broederschap" (Equality, Liberty, Fraternity). From 1802 to 1810 'Unity makes strength' was used again. In 1816, it switched to the House of Orange motto 'Je maintiendrai'.

The motto was used by Belgium after its Revolution of 1830. It was first only in its French form "L'union fait la force".

'Eendragt maakt magt' as the motto on the coat of arms of the South African Republic.

The motto of Brooklyn, a borough of New York City started by Dutch settlers, is still "Eendraght maeckt maght". The motto Eendragt maakt magt also appears on the badge of the police force of Holland, Michigan.

After Ferdinand of the House of Saxe-Coburg and Gotha took over the throne of the Principality of Bulgaria, the country started to use Belgium's motto of L'union fait la force (in Bulgarian: Съединението прави силата). It was the country's motto until 1948.

On 17 January 1852 the United Kingdom, ruler of the Cape Colony, made the South African Republic free. "Eendragt maakt magt" was the motto on the new state's shield. In 1888 the republic decided Dutch was its official language.

An early design of the coat of arms used between 1948 and 1963 used a variation of the motto, "Unity is Strength". It was in both English and Jawi. After three more states were added into the federation in 1963, the English motto of the arms was replaced by a rough Malay translation, Bersekutu Bertambah Mutu (literally "Unity Improves Quality"). The Jawi motto remained unchanged.