Women get urinary tract infections more often than men. Half of women have an infection at some point in their lives. It is common to have repeated infections. Sometimes a person who had a bladder infection will get a kidney infection. Kidney infection also can be caused by bacteria in the blood. Diagnosis in young healthy women can be based on symptoms alone. Sometimes, the urine needs to be tested. A person with frequent infections can take low-dose antibiotics to prevent future infections. 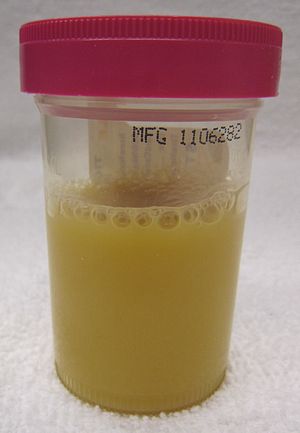 Urine can contain pus (a condition known as pyuria) as seen from a person with sepsis due to a urinary tract infection.

In young children, fever can be the only symptom of a urinary tract infection (UTI). Many medical associations recommend a urine culture for females younger than two year old or uncircumcised males who are younger than a year and have a fever. Infants with UTI sometimes eat poorly, vomit, sleep more, or show signs of jaundice ( a yellow coloring of the skin). Older children can have new urinary incontinence (loss of bladder control).[6]

Urinary tract symptoms are frequently not seen in those who are old.[7] Sometimes, the only symptoms are incontinence (loss of bladder control), a change in mental status (ability to think), or feeling tired.[2] The first symptom for some old people is sepsis, an infection of the blood.[4] Diagnosis can be difficult because many old people are incontinent (cannot hold their pee) or have dementia (poor thinking abilities).[7]

Women get more UTIs than men because women have a urethra that is much shorter and closer to the anus.[9] As a woman's estrogen (a hormone) levels decrease with menopause, the risk of urinary tract infections increases due to the loss of protective l flora (good bacterial that live in the ).[9]

A urinary catheter is a tube that is put into the bladder to drain the urine. Using a catheter increases the risk for urinary tract infections. The risk of bacteriuria (bacteria in the urine) is 3% - 6% every day the catheter is used. Antibiotics do not stop these infections.[9] The risk of an infection can be decreased by:[10][11][12]

Bladder infections are more common in some families. Other risk factors include diabetes,[1] being circumcised, and having a large prostate (a gland around the urethra in males).[2] Complicating factors are not completely clear. These factors may include some anatomic problems (relating to physical narrowing), functional, or metabolic problems. A complicated UTI is more difficult to treat and usually needs more aggressive evaluation, treatment, and follow-up.[13] In children, UTIs are linked to vesicoureteral reflux (an abnormal movement of urine from the bladder into ureters or kidneys) and constipation.[6]

The bacteria that cause urinary tract infections usually go into the bladder from the uretha. It is believed these bacteria come from the bowel. Females are at greater risk because they have a short urethra that is close to their anus). After entering the bladder, E. Coli are able to stick to the bladder wall. They form a biofilm, which is a coating of microorganisms, that resists the body's immune response.[4] However, infections can also come through the blood or lymph.[4]

The following activities do not cause a UTI or make them happen less frequently:[1][9]

For people who keep getting infections, taking antibiotics for a long time is helpful.[1] Drugs frequently used include nitrofurantoin and trimethoprim/sulfamethoxazole. If infections are related to , some women find it useful to taking antibiotics after sex.[4] In post-menopausal women, using topical l estrogen (a hormone applied to the skin of the l) has been found to reduce getting a UTI. Unlike topical creams, the use of l estrogen from pessaries (medical devices put in the is not as useful as low-dose antibiotics.[16] A number of vaccines are being developed (as of 2011).[4] 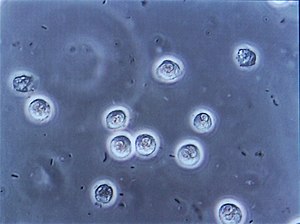 Many bacilli (rod-shaped bacteria, here shown as black and bean-shaped) shown between white blood cells as seen by looking at urine through a microsope. These changes show a urinary tract infection.

In most cases, UTIs can be diagnosed just from the symptoms and there is no need for laboratory testing. Urinalysis (testing the urine) can be used to confirm the diagnosis in complicated cases. The urine is tested for urinary nitrites, white blood cells (leukocytes), or leukocyte esterase. Another test, urine microscopy, looks for red blood cells, white blood cells, or bacteria. Urine culture is considered positive if it shows a bacterial colony count of greater than or equal to 103 colony-forming units per mL of a typical bacteria that causes infections of the urinary tract. Cultures can also be used to test which antibiotic will work. However, women with negative cultures can still improve with antibiotic treatment.[1] UTI symptoms in old people can be vague, and diagnosis can be difficult as there is no really reliable test.[7]

A urinary tract infection is said to be complicated if:[3][4]

To diagnose a urinary tract infection in children, a positive urinary culture is required. Contamination poses a frequent challenge so a cutoff of 105 CFU/mL is used for a "clean-catch" mid-stream sample, 104 CFU/mL is used for catheter-obtained specimens, and 102 CFU/mL is used for suprapubic aspirations (a sample drawn directly from the bladder through the stomach wall with a needle). The World Health Organization does not like the use of “urine bags” to collect samples because there is a high rate of contamination when that urine is cultured. Catheterization is preferred if an individual is unable to use a toilet. Some medical groups, such as the American Academy of Pediatrics, recommend renal ultrasound and voiding cystourethrogram (watching a person's urethra and urinary bladder with real time X-rays while they urinate) in all children who are younger than 2 years old and have had a urinary tract infection.Other medical groups such as the National Institute for Clinical Excellence recommend routine imaging only in babies younger than 6 months old or who have unusual findings.[6]

Phenazopyridine can be used in addition to antibiotics to help ease the burning pain of a bladder infection.[23] However, phenazopyridine is no longer commonly recommended due to safety concerns. It can cause methemoglobinemia, which means there is higher than normal level of methemoglobin in the blood.[24] Acetaminophen can be used for fevers.[25]

Women who keep getting simple UTIs can benefit from self-treatment; these women should get medical treatment medical only if the initial treatment fails. Health care providers may also prescribe the antibiotics by phone.[1]

Simple infections can be diagnosed and treated based on symptoms alone.[1] Oral antibiotics such as trimethoprim/sulfamethoxazole (TMP/SMX), cephalosporins, nitrofurantoin, or a fluoroquinolone will shorten the time to recovery. All these drugs are equally effective.[26] A three-day treatment with trimethoprim, TMP/SMX, or a fluoroquinolone is usually enough. Nitrofurantoin needs 5–7 days.[1][27] With treatment, symptoms should improve within 36 hours.[3] About 50% of people will get better without treatment within a few days or weeks.[1] The Infectious Diseases Society of America does not recommend fluoroquinolones as first treatment because of concerns that overuse will lead to resistance to this class of drugs, making these drugs less effective for more serious infections.[27] Despite this precaution, some resistance has developed to all of these drugs because to their widespread use.[1] In some countries, trimethoprim alone is deemed to be equivalent to TMP/SMX.[27] Children with simple UTIs are often helped by a three-day course of antibiotics.[28]

Pyelonephritis (kidney infection) is treated more aggressively than a simple bladder infection using either a longer course of oral antibiotics or intravenous antibiotics.[29] Seven days of the oral fluoroquinolone ciprofloxacin is typically used in geographic areas where the resistance rate is less than 10%. If the local resistance rates are greater than 10%, a dose of intravenous ceftriaxone often is prescribed. People with more severe symptoms are sometimes admitted a hospital for ongoing antibiotics.[29] If symptoms do not improve following two or three days of treatment, it can mean that the urinary tract is blocked by a kidney stone.[2][29]

Urinary tract infections are the most frequent bacterial infection in women.[3] They occur most frequently between the ages of 16 and 35 years. Ten percent of women get an infection yearly; 60% have an infection at some point in their lives.[1][4] Nearly half of people get a second infection within a year. Urinary tract infections occur four times more frequently in females than males.[4] Pyelonephritis (a kidney infection) occurs between 20–30 times less frequently than bladder infections.[1] Pyelonephritis is the most common cause of hospital acquired infections, accounting for approximately 40% of hospital-acquired infections.[30] Rates of asymptomatic bacteria in the urine increase with age from 2% to 7% in women of childbearing age to as high as 50% in elderly women in care homes.[9] Rates of aysmtomatic bacteria in the urine among men over 75 are 7-10%.[7]

Urinary tract infections can affect 10% of people during childhood.[4] Urinary tract infections in children are the most common in uncircumcised males younger than 3 months of age, followed by females younger than one year.[6] Estimates of frequency among children, however, vary widely. In a group of children with a fever, ranging in age between birth and 2 years, 2- 20% were diagnosed with a UTI.[6]

In the United States, urinary tract infections lead to nearly seven million office visits, a million emergency department visits, and 100,000 hospitalizations every year.[4] The cost of these infections is high due to both lost time at work and costs of medical care. The direct cost of treatment is estimated at 1.6 billion USD yearly in the United States.[30]

Urinary tract infections have been described since ancient times. The first written description, found in the Ebers Papyrus, dates to around the 1550 BC.[31] The Egyptians described a urinary tract infection as "sending forth heat from the bladder."[32] Herbs, bloodletting, and rest were the common treatments until the 1930s, when antibiotics became available.[31]

Pregnant women with UTIs have a higher risk of kidney infections.During pregnancy, high progesterone (a hormone) levels decreased muscle tone of the ureters and bladder. Decreased muscle tone leads to a greater likelihood of reflux, where urine flows back up the ureters and toward the kidneys. If bacteria are present, pregnant women have a 25-40% risk of a kidney infection.[9] Thus treatment is recommended if urine testing shows signs of an infection—even in the absence of symptoms. Cephalexin or nitrofurantoin are typically used because those medications are generally considered safe in pregnancy.[33] A kidney infection during pregnancy may result in premature birth or pre-eclampsia (a state of high blood pressure, kidney dysfunction, or seizures).[9]

[[Category:Diseases and disorders of the female repro