Viareggio is a city in northern Tuscany in Italy on the coast of the Tyrrhenian Sea. With over 63,000 people it is the main centre of the northern Tuscan Riviera known as Versilia, and the second largest city in the Province of Lucca.

Viareggio is famous for the "Passeggiata", a promenade, and for the oldest Carnival in Europe, the "Carnevale di Viareggio".

The city’s name comes from the Latin "via regis", the name of the Medieval road used for going to Lucca.

In the area we can find the rest of Ligurian, and other peoples from north Italy. The area of "Ersilia", is very rich in old artifacts.

With time, Viareggio has also gained the title of Capital of Versilia. The first historical fact concerning Viareggio dates 1169 when a wooden tower guarding coast was built, however Viareggio, was in a bad area for living, how Giovanni Boccaccio spoke in his book the "Decamerone".

This century was perhaps one of the most difficult periods for the 300 inhabitants of Viareggio; the area was really bad, for the life, often people died for malaria, but however slowly Viareggio changed its appearance; two small churches and as many factories were built, followed by a number of small shops.

With the fall of Napoleon, Viareggio was the centre of several acts of violence. In March 1814 viareggini, (the people born in Viareggio) attack the French soldiers.

Viareggio remained under the control of the Austrians until 1817 when, as part of the agreements from Congress of Vienna, Maria Luisa di Borbone was assigned the new Duchy of Lucca. In 1820 Viareggio was officially proclaimed city.Carlo Ludovico di Borbone helped the city, building a new church, a royal casino and two beach resorts, the first ones to be built in Viareggio.

During these years Viareggio’s economy had a very rapid expansion about the sailboat industry.

Viareggio begins to be a place for tourism, The Passeggiata or promenade was born, with its cafés and shops, contributing to make famous the city, that after will be called friendly the "Pearl of the Tyrrhenian Sea".

During World War II Viareggio was subject to heavy bombings and entire suburbs of the city were destroyed.After the war, the reconstruction was really hard to do.Today Viareggio is a very nice city for tourism.

Patron Saint of the city

Patron saint of the city is Maria Santissima Annunziata 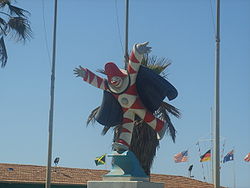 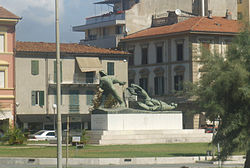 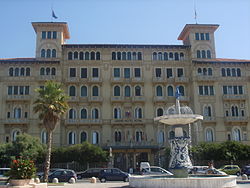 Monumental Fountain with the Grand Hotel in the background

Torre Matilde and the Marina of Lucca 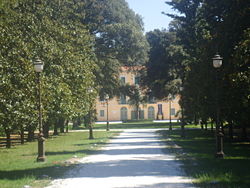 A float being towed out of the Cittadella del Carnevale

View of the Promenade 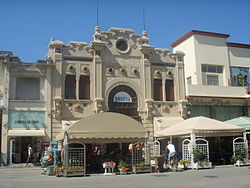 The oldest carnival in Italy and Europe, and surely the most important. It was started in 1873. The official masks of the Carnival are Burlamacco and Ondina, drawn for the first time in 1930. Since 1954, RAI broadcasts the event on national TV.The carnival it's really famous because, on the carnival, there are masks about ministers, or show man.

In Viareggio there are many resources, sea tourism, with the very nice cost, tourism, and a very big industry about flowers and fruit.Viareggio is famous in Italy for the beauties local shops, near the city and near the beach.