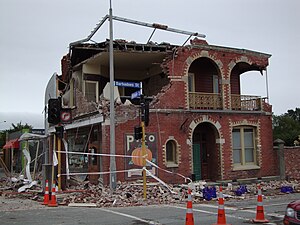 The 2011 Christchurch earthquake was a 6.3 magnitude earthquake[8] which struck the South Island of New Zealand at 12:51 pm on 22 February 2011 NZT. (This is 23:51 21 February UTC).[8] It was about 5 km underground.[9] It struck the Canterbury region of the island and caused a lot of damage and many deaths in Christchurch, New Zealand's second largest city.

It was the largest aftershock of the 4 September 2010 Canterbury earthquake,[10] although it is being regarded as a separate earthquake. It was smaller than the September earthquake, but it was more damaging because it was closer to Christchurch and nearer to the surface of the earth. It also happened at lunchtime on a Tuesday compared to before dawn on a Saturday, which meant that more people were outside and in danger of being injured by falling buildings. Buildings were also already weakened from the previous quakes.[11][12] The intensity felt in Christchurch was MM VIII.[13]

Prime Minister John Key said that the 22nd of February "may well be New Zealand's darkest day".[14] At least 166 people have been confirmed dead with the final death toll expected to be over 200.[15]

At the end of the first day 65 people were known to have died,[16] and the number is expected to rise. Over 100 people may be trapped in one building alone.[17] The New Zealand Fire Service says many people were injured and trapped in buildings.[18] At 5pm local time Radio New Zealand reported that 80% of the city was without electricity. Water and wastewater services are not working in many parts of the city. People are being asked to use as little water as possible and to collect rainwater. It is expected that the State of Emergency Level 3, the highest possible in a regional disaster, will last at least five days. Medical staff from the army are being used.

The Sydney Morning Herald reported that two buses and a number of cars were crushed by falling buildings.[19] 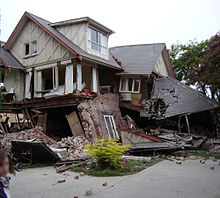 Buildings have collapsed around Cathedral Square in downtown Christchurch. The spire of ChristChurch Cathedral has completely collapsed. Christchurch Hospital was evacuated due to damage in some areas,[20] but soon reopened to treat the injured. It has treated over 220 serious injuries so far, even though sometimes they were working by torchlight. The New Zealand defence forces have been called in to help move people out of the central business district.[21] Fires were reported at the Canterbury Television (CTV) building.

The Pyne Gould Corporation building on Cambridge Terrace has suffered a lot of damage (photo), and some of the building's 200 workers are believed to be trapped within. Screams have been heard from inside.[22]

The Statistics New Zealand buildings in Christchurch were also damaged. They were due to process much of the March 2011 census of New Zealand. The census has been cancelled because people living in Christchurch have had their lives seriously disrupted.[23] This is the third time the census has been cancelled, the previous two times being during the Great Depression and World War II.[24]

ChristChurch Cathedral has lost the top of its main spire and its roof has fallen in.[25][26] (photos) Initial reports said 22 people were in the spire at the time of the collapse.[27] However, after the building was made safe to enter over a week after the quake, and searched thoroughly, no bodies were located.

Cathedral of the Blessed Sacrament

The Catholic cathedral of Christchurch, the Cathedral of the Blessed Sacrament, has half collapsed.[28]

Buildings in Lyttelton have been damaged; a fire officer said that 60% of the buildings in the main street have collapsed.[29] The town's historic Timeball Station was also badly damaged. The New Zealand Historic Places Trust who own the building have decided that it is unsafe to try to repair it. It will be dismantled, if possible, and perhaps re-constructed.

Beyond Christchurch and Lyttelton

Around 30 million tonnes of ice fell off Tasman Glacier into Tasman Lake, about 200 kilometres (120 mi) from the epicentre, hitting tour boats with waves 3.5 high.[30]

The quake was felt as far north as Tauranga[31] and as far south as Invercargill, where the 111 emergency network was damaged and stopped working.[32]

Australia has offered help, and immediately sent a search and rescue team of 70 from New South Wales on a RAAF C-130 Hercules.[22] Foreign Affairs Minister Kevin Rudd also said a second team from South Australia will also be sent with more equipment. Australian Prime Minister Julia Gillard has offered John Key any other help he may need.[35] The United States and Japan have also offered help.[36]

Christchurch International Airport was only open for emergency air traffic,[37] but has now been opened to all local and domestic flights. The earthquake has affected all air traffic in New Zealand. Air traffic control services by Airways New Zealand, the national Air Traffic Control organisation, have been disrupted.[38]