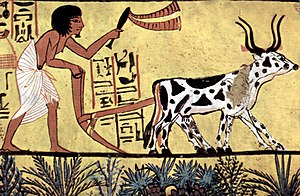 Ancient Egyptian agriculture was probably the first to be practiced on a large scale.[1] They grew staple food crops. These included grains such as emmer (a variety of wheat) and barley.[2] The earliest evidence of irrigation in the Nile area is about 3100 BC.[3]

They also grew flax for clothing and oil.[2] Orchards and vegetable gardens were also common. Unlike other crops these were grown away from the areas flooded by the Nile river each year.[2] Agriculture was the basis of the ancient Egyptian economy.[4] It gave work and food for its people. It was a source of wealth for Egypt's elite. Egypt was the breadbasket (main provider of food) for much of the ancient world.[4] 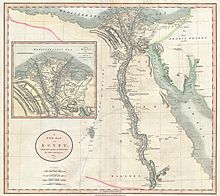 1805 map showing the Nile valley and Delta in detail

The geography of ancient Egypt was unlike that in other parts of the Mediterranean region, which had rainy winters and hot dry summers.[4] In Egypt most of farming was done near in the Nile river valley and the Nile Delta.[4] Egypt had little rainfall and the land had to be irrigated.[4] This was from the Nile either when flooded or normally.

The Nile began to rise in the summer and go down again in late fall. The growing season was during the winter months.[5] It was called Sha-et (the growing season).[5] The second season was called P' ru-et (the dry season). This is the hot dry season when the grain was harvested and stored.[5] The third season, She (sea) was the months during which the Nile flooded. Each season was about four months long.[5] The fertile Nile valley is about 760 miles long and about 14 miles wide.[6] The rest of Egypt is desert.[6]

This system allowed one crop a year. A shorter agricultural season meant more workers available for construction of buildings like temples and other royal buildings.[7] Workers were also used for year-round irrigation projects. Water was usually carried manually on men's shoulders using yokes.

To plant, they dug a hole in the ground, and put one seed in each hole. They used furrows. They grew wheat, barley, vegetables, figs, melons, pomegranates and vines. Crops were very important to Egyptians. They grew lettuce, cucumber, wheat, barley, figs, pomegranate and beans. Shemu was the harvesting season. Peret was the growing season. Akhet was the flooding season. In October, the river Nile left a layer of soil. Kemet is left behind from flooding. They grew their crops on the edge of the bank on the river Nile, then they waited for the Nile to flood and then all was left was soil to plant there crops.

The harvest season was called Shemu. The reapers cut the grain with wooden sickles that had sharp flints. The cattle trampled over the cut grain. They tossed grain into the air so the breeze blew the useless chaff away. It was hard and slow. Harvest takes place in spring but finishes in May. Families hired workers to do the job. Everyone took part in harvest. Farmers had to barter. Many of them harvested crops to trade for the things and animals they needed to plant more crops.

Ancient Egyptians had tools like winnowing scoops, mattocks, flint bladed sickles and plows. All of the tools were simple and made by hand. The Egyptian plow had a small blade on it but did not cut the soil.

A Shaduf is an object used to collect water from the river Nile. The Shaduf works by pulling the string at the front and at the back there is a weight to stop it from falling forwards. Shadufs are used to get the water out of the Nile to water the crops.

The Egyptians believed that a balanced relationship between people and animals was an essential element of the cosmic order; thus humans, animals and plants were believed to be members of a single whole.[8]p117 Cattle were the most important livestock; livestock were taxed; the size of a herd reflected the prestige and importance of the estate or temple which owned them. In addition to cattle, the ancient Egyptians kept sheep, goats, and pigs. Poultry such as ducks, geese, and pigeons were captured in nets and bred on farms, where they were force-fed with dough to fatten them.p381 The Nile provided a plentiful source of fish. Bees were also domesticated from at least the Old Kingdom, and they provided both honey and wax.p409

The ancient Egyptians used donkeys and oxen as beasts of burden. They plowed the fields and trampled seed into the soil. The slaughter of a fattened ox was part of an offering ritual.p381 Horses were introduced by the Hyksos in the Second Intermediate Period, and the camel, although known from the New Kingdom, was not used as a beast of burden until the Late Period. There is also evidence to suggest that elephants were briefly used in the Late Period, but largely abandoned due to lack of grazing land. Dogs, cats and monkeys were common family pets, while more exotic pets imported from the heart of Africa, such as lions, were reserved for royalty. Herodotus observed that the Egyptians were the only people to keep their animals with them in their houses.[8] During the Predynastic and Late periods, the worship of the gods in their animal form was extremely popular, such as the cat goddess Bastet and the ibis god Thoth, and these animals were bred in large numbers on farms for the purpose of ritual sacrifice.[9]p229