Atchison County (county code AT) is a county in northeastern Kansas, in the Central United States. In 2010, 16,924 people lived there.[2] Its county seat is Atchison. Atchison is also the biggest city in the count.[3] The county is named after David Rice Atchison, a United States Senator from Missouri.[4] 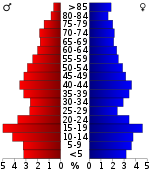 Atchison County has been a swing county for most of its history. It has had multiple extended streaks of being a bellwether county, the first running from 1896 to 1936. After voting more Republican than the nation in the 1940s & voting for losing candidate Richard Nixon in 1960, another bellwether streak ran from 1964 to 2004. Since then, the county has become significantly more Republican, with Barack Obama failing to win the county in both of his victories & Hillary Clinton losing it by over 30 percent to Donald Trump in 2016.