Auch (Gascon: Aush or Aux) is a commune in southwestern France, in the region of Midi-Pyrénées. It is the prefecture (capital) of the Gers department. It is also the capital of 4 cantons: Auch-Nord-Est, Auch-Nord-Ouest, Auch-Sud-Est-Seissan and Auch-Sud-Ouest.

Auch is the historical capital of Gascony and the people of this city are known, in French, as auscitain (women: auscitaines).[1] 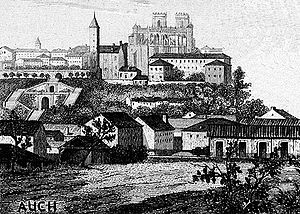 Auch is an ancient town. The name of Auch comes from the people that inhabited the area at the time of the Roman conquest. The name of this tribe was Ausci, singular Auscus.

The Romans named the town where that tribe lived as Augusta Auscorum (or Augusta Ausciorum), which means "Augusta of the Ausci". Eventually, Augusta was dropped, and the name changed into modern Gascon Aush, and modern French Auch. 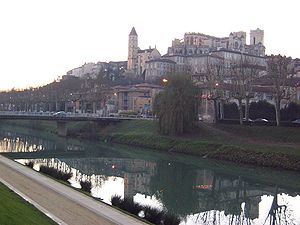 Auch is in the southwest of France, in Armagnac (Gascony), in the valley of the Gers river. It extends along the sides of the river that gives its name to the department.

The river splits the city in two parts:

The climate of the department is an oceanic climate with template summers, Cfb (Marine West Coast Climate) in the Köppen climate classification.[3]

A city founded by the Romans, Auch had its period of power during the Middle Ages, when it was the capital of the old province of Gascony. The high quality of the limestone is an important component of its monuments and buildings, such as its cathedral.

Some of these places of interest are:

Auch is twinned with:

Arrondissements of the Gers department