The Gers (Gascon: Gers) is a department in the Midi-Pyrénées region in the southwest of France named after the Gers river.

The Gers is one of the 83 French departments made during the French revolution, on 4 March 1790. It was created from parts of the old provinces of Guyenne and Gascony.

in 1808, part of the Gers department was transferred to the new Tarn-et-Garonne department'.[3] 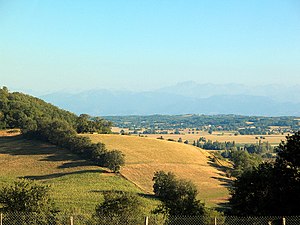 Summer in the Gers. In the background the Pyrenees.

The Gers is known for its hilly landscape and bastide villages. The Pyrenees are visible to the south.

The main rivers of the department are the Garonne and the Gers, a left tributary of the Garonne. Other rivers are Save, Gimone, Arrats, Baïse and Osse.

The climate of the Gers is an oceanic climate with template summers, Cfb (Marine West Coast Climate) in the Köppen climate classification.[4]

The department is managed by the General Council of the Gers in Auch. The Gers is part of the region of Midi-Pyrénées.

There are 3 arrondissements (districts), 31 cantons and 463 communes (municipalities) in the Gers.

The inhabitants of Gers are known, in French, as Gersois (women: Gersoises).[5]

The economy in the Gers revolves primarily around agriculture and culinary tourism. The department is a producer of maize, wheat, rapeseed, sunflower.

Some well-known products of the region are:

Arrondissements of the Gers department