Midi-Pyrénées (Occitan: Miègjorn-Pirenèus or Mieidia-Pirenèus) is a region in the south of France. With over 45,000 square kilometers, it is the largest region of mainland France (the largest of all French regions is French Guiana), and it is part of the historical region of Occitania.

The French adjective and name of the inhabitants of the region is: Midi-Pyrénéen.

The departments in the region are Ariège, Aveyron, Haute-Garonne, Gers, Lot, Hautes-Pyrénées, Tarn, and Tarn-et-Garonne. Its capital is Toulouse.

The Midi-Pyrénées region is the largest region of Metropolitan France with an area of 45,348 km2 (17,509 sq mi). It borders to the south with Spain and Andorra; it also borders four French regions: Aquitaine to the west, Limousin to the north, Auvergne to the northeast and Languedoc-Roussillon to the east.

The region can be divided into three landscape zones:

The Midi-Pyrénées region is formed by eight departments: 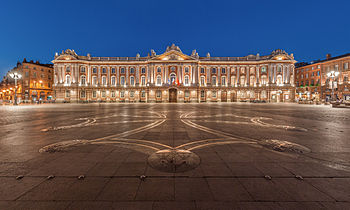