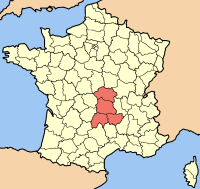 Auvergne is marked in red

Auvergne is a region of France. It is among the least populated ones. It is in the centre of the country. Its capital is Clermont-Ferrand. 1.3 million people live there. 141.000 of them in Clermont-Ferrand.

The departments in Auvergne are Allier, Cantal, Haute-Loire, and Puy-de-Dôme.

As with other rural regions in France, the Auvergne now has a growing but still relatively small population of expatriates from Britain and the Netherlands in particular. While some people think that this has had a bad effect on house prices, the expatriate communities have invested millions of euros in local businesses (especially in the building sector) and tend to be relatively well integrated into local life compared to other better known parts of France.

Auvergne is known for cheese.

This short article about a place or feature in France can be made longer.